Bringing Relief to Disadvantaged in Galle 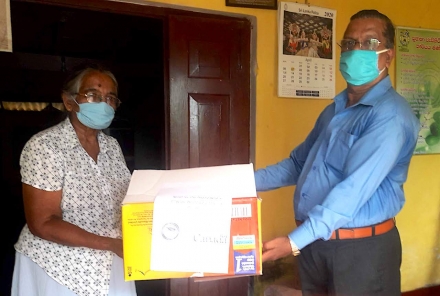 Galle DIRC worked closely with relevant government officials including Social Services Officer M.F. Sharmila from the Bentota Divisional Secretariat office who helped to identify homes that were struggling due to the curfew restrictions imposed to prevent the spread of the corona virus.

“The Sugatha Elders’ Care Centre is run with minimum funds; it has 85 residents. When the curfew was imposed, the home was unable to find enough food items to feed the residents. They had no milk powder. I thank NPC and the Canadian donor for this kind act of providing rations during these troubled times.”

The Sambodhi Children’s Home was having difficulties even before the curfew. A philanthropist had founded the home and was supporting it but after his death, the funds stopped. The 30 children, who are differently-abled, were fed by donations from neighbours. These donations came to a halt during curfew, so the gift of dry rations was received with much appreciation.