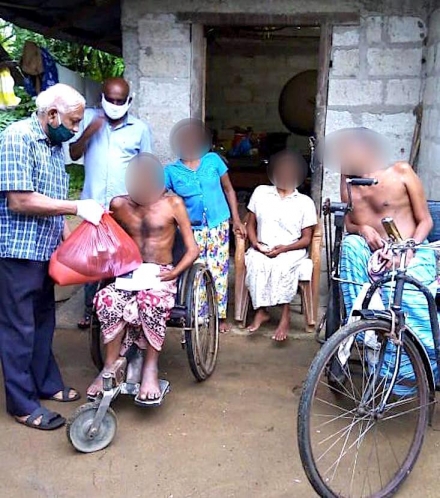 Hambantota DIRC members supplied Rs. 100,000 worth of dry rations to low income families living in the Tangalle and Hambantota areas with funds donated to NPC by Misereor.

One beneficiary family in Tangalle consisted of four differently-abled members who were in wheelchairs. They had been unable to earn any money selling lottery tickets during the curfew. They were grateful for the provisions they received. They also made a request for new wheelchairs as theirs were old and worn.

Another family was headed by a widow with three school-going daughters. They had been surviving during the curfew period through the generosity of friends and relatives, and were happy to receive the rations.

In another family, the wife was paralysed and the husband, a daily wage earner, was deprived of his income, so the ration pack was welcome.

“I am 75 years old and I make money by selling food. I also have cancer, which makes it even harder for me to go out and earn my daily wages, so am grateful for this donation from NPC and the donor. It is impossible for me to earn any money during the curfew and when people are afraid to eat food from outside their homes,” said I. Kandaiyya.

“My husband used to be a daily wage worker but he was attacked by an elephant and is now an invalid. Because I have to look after him and my elderly mother, I am unable to work. We were suffering even before the curfew but with this new situation, we are completely helpless. We are thankful to Hambantota DIRC for recognising our hardships and for coming to our home to give us the food pack,” said W.G. Aulawathi.