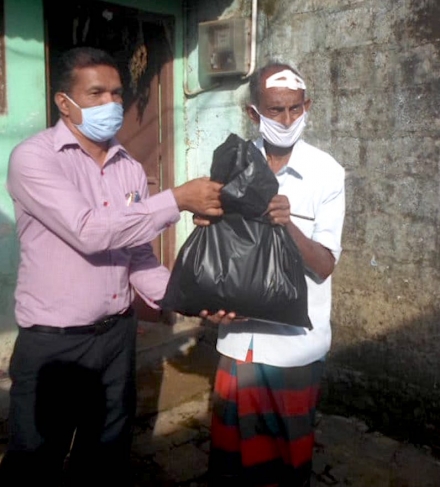 Under NPC’s Covid-19 relief programme, the Matara District Inter Religious Committee (DIRC) organized the supply of dry rations to estate workers in Deniyaya who have been affected by the curfew imposed to stop the spread of the virus. The programme is funded by the Canadian government under its Canada Fund for Local Initiatives (CLFI).

Estate workers living in the Southern Province are mostly daily labourers who earn their livelihood by doing jobs on the estates. Some live on company land others while others live in surrounding areas. Earlier this year they did not have work because of a severe drought. Now they are unable to work because of the pandemic and as a result, are unable to feed their families.

Matara DIRC members Mr. K.S. Lankathilaka and Mr. V. Udaykumar spearheaded the donation to the estate community in Deniyaya, where they distributed 25 packs of dry rations that included rice, flour, noodles, biscuits, sugar and other essentials items such as soap and toothpaste.

S. Selvakumari said, “I have four young children. My husband is a labourer on an estate. His elderly parents live us. When we were suffering from a lack of food and money, the company gave us a food pack on credit but they did not give one to his parents although they have worked all their lives on this estate. At a time when even our own employer did not give us enough help, this donation by NPC and the Canadian donor is very valuable and we are extremely thankful.”

S. Rajeswary said, “I have five children and I work as a labourer on an estate. Last week a religious organization distributed food packs only to their religious followers. I did not receive one because I am a Hindu but we are also suffering from a food shortage just like everyone else in the area. I am thankful to the DIRC and NPC for supplying food for all of us in need, regardless of religious and ethnic differences.”