Relief Packs to Needy in Beruwela 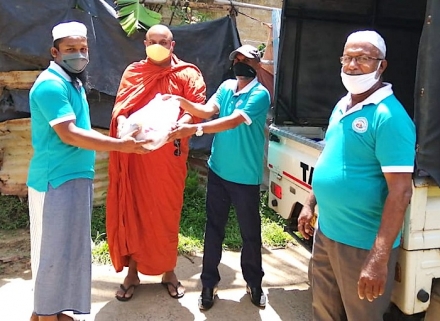 Members of the Beruwela Local Inter Religious Committee (LIRC), with support from NPC, distributed 100 packs of dry rations to needy families in the area with funds received from Misereor.

LIRC members and Grama Niladhari officers made a list of beneficiary families including female-headed households, daily wage earners and differently-abled people. The packs were distributed with the participation of Beruwela LIRC members.

People in the Beruwela area, which relies heavily on tourism as a means of livelihood, have been badly affected by the curfew imposed to prevent the spread of Covid-19. Mr. Chathura Malraj, Divisional Secretary of Beruwela pointed out that more funds were needed to assist orphanages and elders’ homes.

LIRC member Mr. Upali Jayarathne, said, “I am happy to be part of this initiative. We only had a limited number of packs. Many beneficiaries asked for help for their neighbours as well.”

“The packs were given to Hindus, Buddhists, Catholics and Muslims and delivered in time for new year. Many Hindu and Buddhist beneficiaries told us that they had had nothing at home to celebrate the new year, so they were grateful for the provisions,” Ms. Anjali, Grama Niladhari Officer of Welipitiya Divison, said.