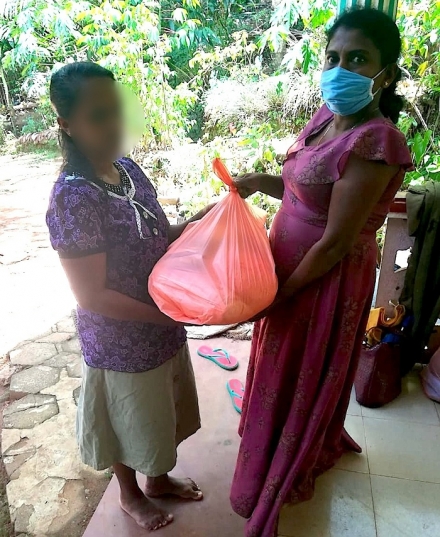 These beneficiaries are part of efforts to uplift and empower marginalised groups through knowledge sharing and skill building. They are among the most severely affected as a result of the curfew in Sri Lanka. Life for marginalised persons, especially PWDs, is difficult under normal circumstances in the face of discrimination and sidelining due to their disabilities. They are most often unable to earn a living and are fully dependent on their relatives or the state for support.

The dry rations pack worth Rs. 2,000 was a welcome relief to many who said that it came at a time when they felt truly hopeless. The pack contained rice, dhal, wheat flour, coconut and other necessities. Each pack included a brochure containing basic health guidelines to minimise the effects of the virus and was branded with the EU logo. All HRFAC coordinators and volunteers followed health guidelines issued by the government when carrying out distributions.

In Gampaha, 48-year-old Sumith Aminda has been using a wheelchair to get around for the past 20 years, the result of an accident. He says that the basic necessities package provided with assistance from the EU through the Gampaha HRFAC was the first time he had received any support since the country went under curfew.

“I am unable to hold a permanent job because of my disability and we depend on my daughter’s salary to survive. Now she’s also at home. We are quite helpless,” he says, lying in bed in his tin roofed house. The current crisis has made Sumith miss his weekly visits to the hospital to change the tubes that assist his bladder function because he does not have the funds to pay for transport.

In Batticaloa, 70-year-old T. Saraswathi from Koolavadi village is a founding member of the Batticaloa HRFAC. She lost her husband in the war and lives with her daughter, also a widow. Both have no permanent source of income and survive by helping out in neighbourhood homes. With the curfew in place they are unable to earn a living and Mrs. Saraswathie is worried about her two grandsons, aged 11 and 16 years going hungry. The family is grateful for the pack of essential items.

Fifty-three-year-old Antony Robert is part of the marginalised communities’ group maintained by the Batticaloa HRFAC. After attending an EU supported training on skills building and state support mechanisms available for persons with special needs, Anthony was able to apply for disability benefits from the government with help from the HRFAC.

“I am going to open a snack shop when I get help from the government,” he says hopefully. He is one of the recipients who received a pack of basic necessities that will help him, his aged mother and sibling to survive a few days of the curfew.

Fifteen-year-old Sachini Piyumika from Batagama in the Gampaha District attends trainings at the Gampaha HRFAC with her mother. She has special needs and her three-wheel driver father used to be able to take care of her by running hires. As a result of the curfew he is no longer able to earn a living. Sachini’s mother, Shriyanthi Mary Perera, asked for support to purchase Sachini’s personal hygiene items which are necessary for daily use. “My daughter has never let her disability break her spirit. But this crisis is slowly eroding her resilience because she can see that we are unable to provide for her,” Mrs. Perera says.

At 87 years old, woodcraftsman Gunapala from Mampitiya in Galle should be spending his days in peace and comfort. However, this is not to be for him and his 80-year-old hearing impaired wife, who have survived the curfew due to the kindness of neighbours. Gunapala is a victim who has sought assistance from the Galle HRFAC to help him to apply for disability and Samurdhi benefits (support given by the government to low income families). These benefits have not yet materialised but Gunapala has continued to attend workshops run by the HRFAC regularly, and is one of the oldest participants. He says, “Our two children have abandoned us. We have no one to help us. I come to the HRFAC when I am desperate. This package is a godsend.”

“I haven’t received my salary from the Ginthotha Plywood Corporation for two months now. How are we going to live?” asks 31-year-old mother of two, Nayomi Kaushalya, from Welipita in the Galle District. She lives with her ailing parents and four siblings. Nayomi became a widow in 2017 when her husband succumbed to a viral infection. She has been part of the Galle HRFAC, having first gone there to seek support when her husband passed away. She continues to regularly attend programmes conducted by the HRFAC. While she understands that employment opportunities for temporary staff like her will be difficult in the future, she is angry that her rightful salary has not been not paid. She is grateful for the essentials package.

Murugiah Letchumi is a 78-year-old widow from Parupukadanthaan East in the Mannar District. She lost two of her children during the war and continues to care for her surviving son who was injured and disabled during the war. The only source of income for Letchumi was by selling gram during festivals at places of worship in the village. As part of the marginalised communities’ group of the Mannar HRFAC, she was a recipient of the pack of essential items. She appreciated the gesture as she could not earn anything due to the curfew.

Thirty-seven-year-old Mihira Oshitha from Ihalagama in the Matara District used to earn a living by selling gram in the town area. With this, he supported his 75-year-old mother, who is his primary caregiver as Mihira has been differently-abled from birth and uses a wheelchair to get around. With the curfew, Mihira has not earned anything to support himself or his mother. “I am stuck in this broken down wheelchair and can’t do much during this crisis. I have to earn to take care of my mother. This help through the Matara HRFAC is appreciated as it is easy to forget people like me because we have so little representation out there,” he says.

Siriyalatha Rajapakshe and her family from Deniyaya were forced into self-quarantine because her husband, a Colombo based woodcraftsman, returned to the village from Colombo in the early days of the curfew. Uninformed villagers, suspicious that her husband was carrying the Covid-19 virus, forced the family to isolate. Despite receiving support from relevant authorities during the self-quarantine period, they are now without any means of support because her husband had not been paid his salary when the curfew was imposed. With three school going children in the house, Siriyalatha appreciated the pack of provisions that she received through the Matara HRFAC with support from the EU.

A total of Rs. 3,000,000 has been committed to help project beneficiaries. Efforts are continuing through the 11 Human Rights First Aid Centres to support people affected by the pandemic with a second set of deliveries.