Political attention at the present time is focused on two issues that are being used to create a sense of larger governmental failure. The first is that of payments made by a single business company, PTL and its subsidiaries, to a large number of parliamentarians whose number seems to be increasing by the day. Although the sums being mentioned are in the millions, which is very large by the calculations of ordinary citizens, they are nowhere near the tens and hundreds of millions that are understood to be part of every major infrastructure project, some of which have turned out to be pure white elephants, such as the Mattala International airport. As mentioned by some of the politicians whose receipts of funding have been exposed, the practice of receiving funds from business enterprises is widespread.

President Maithripala Sirisena’s speech at the commemoration event for the late Ven Madulawave Sobitha Thero, was another indication that all was not well within the unity government. The venerable monk was the person who welded several disparate political parties and civic groups together to challenge the might of the Rajapaksa government. The previous government exemplified the Rule of Men and not the Rule of Law, which its own Lessons Learnt and Reconciliation Commission warned against. Its leaders still show little or no remorse for the violations of law and human rights in the past. The commemoration held in the venerable monk’s honour was intended to be an occasion for remembering what he had stood for and the promises that those who had worked with him made regarding good governance and against corruption. Instead of which, President Sirisena made it into an occasion to severely criticize the outcome of that endeavor.

The sudden recommencement of the constitutional reform process after a break of over six months coincides with JVP’s proposed 20th Amendment to the constitution which would abolish the executive presidency in its present form. The parliamentary steering committee which is headed by Prime Minister Ranil Wickremesinghe is reported to have instructed its experts committee to submit a paper for consideration within two weeks. If the 20th Amendment were to become law it would mean the diminishing of the president’s role in governance and a corresponding enhancement of the prime minister’s power. It would also do away with the need for a national election for the presidency, as the president would be elected by parliament. This would present a scenario that could see the evolution of a new partnership between President Maithripala Sirisena and Prime Minister Ranil Wickremesinghe.

Danger of Space for Dissent Being Captured by Nationalists - Jehan Perera

The rise in public manifestation of ethnic nationalism in the North was evident at this year’s commemoration ceremonies of the last phase of the war at Mullivaikkal of May 18, 2009. Several thousands of people attended the ceremony of remembrance held there at the monument erected in memory of the civilians killed in the war. This is the first time since the end of the war that a political event took place on May 18. Politicians from the moderate TNA who attended the event were not permitted to speak and instead university students and nationalist members of civil society groups took the centre stage. Although it was the Northern Provincial Council that had resolved to remember the Tamil civilians who died in the war, it was reported that even the Chairman of the Northern Provincial Council was physically stopped from entering the podium. 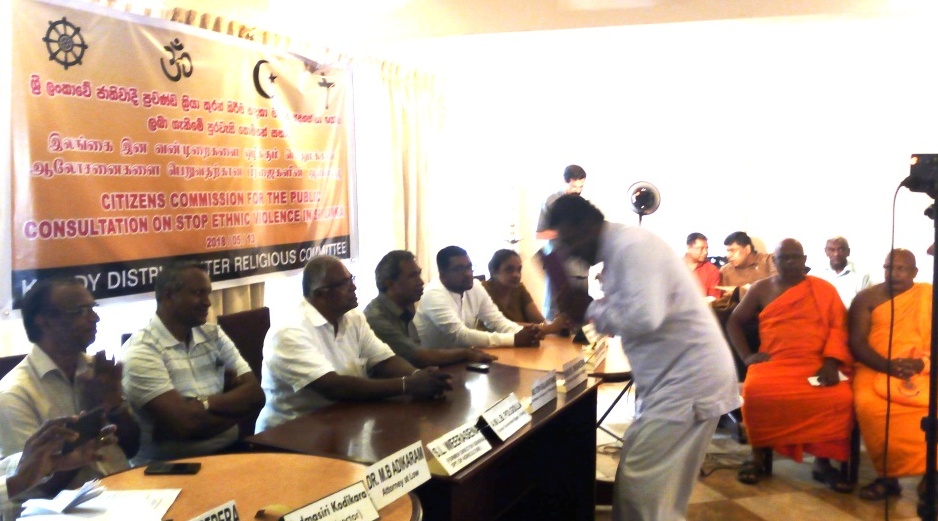 On Sunday a meeting of a truth commission took place in Kandy in which I was an observer. This was not the truth commission promised by the government to the international community in Geneva in October 2015. Rather, it was an unofficial body, a citizens’ truth commission, set up by the District Inter Religious Committee of Kandy. The District Inter Religious Committee (DIRC) had previously been involved in mitigating the violent situation that had arisen Kandy in early March 2018 and which lasted for a week in defiance of police curfews declared in the district. The DIRC members influenced the government officials, relevant religious leaders and academic persons in the area to take necessary action to solve the problem. In the midst of the troubled period, the DIRC also held a media conference to request all communities to be peaceful and to avoid escalating the problem.

One of the promises of the government alliance when they contested the 2015 presidential and general elections was to end corruption. The belief that corruption was deep rooted in the former government was well entrenched by the time of those elections. The promise to end corruption by the new government leaders was also believable as both President Maithripala Sirisena and Prime Minister Ranil Wickremesinghe did not come with such baggage. This belief was increased by the immediate passage of the 19th Amendment to the constitution that strengthened the independence of the judiciary, the police and the bribery commission.

The political debate about the proposed 20th Amendment needs to be considered in the national perspective. The JVP’s proposed amendment is intended to abolish the popularly elected executive presidency and replace it with a significantly less powerful presidency to be elected by parliament rather than by the people. Those in the political opposition are currently the most vocal in their opposition to the proposed amendment. Those on the government side have been more or less silent so far.

The JVP is proposing a 20th Amendment to the constitution which will centre around the abolition of the executive presidency. This follows on the crisis in governance that culminated in the no-confidence motion in parliament against Prime Minister Ranil Wickremesinghe. The background to this was the open manifestation of a power struggle between President Maithripala Sirisena and Prime Minister Wickremesinghe which highlighted the problem of having dual centres of executive power. On the one hand, the president who is directly elected by the people enjoys the position of head of state and head of government. On the other hand, the prime minister who has the support of the majority in parliament is also vested with executive powers.

The defeat of the no confidence motion against Prime Minister Ranil Wickremesinghe by the relatively large margin of 122-76 votes in Parliament has renewed the fortunes of an ebbing government. Just a fortnight ago it was reeling under the twin impacts of the loss suffered at the local government elections held in February and its inability to nip the anti-Muslim riots the following month in Kandy in the bud. There was concern that the government had been rendered ineffective due to its internal divisions and was adrift in the ocean of politics without a sense of direction. However, by prevailing at the no confidence motion with a comfortable majority, the government has renewed the impression that the coalition of political forces that brought it to power in 2015 is still intact.