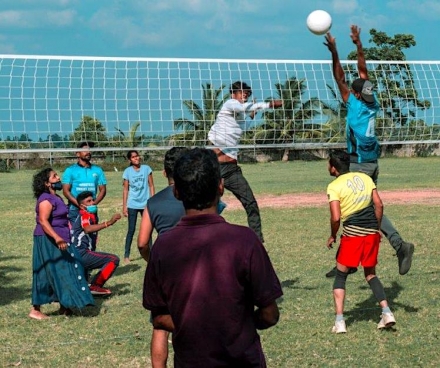 Members of the Galle District Inter Religious Committee (DIRC) and philanthropists in the Galle area purchased Rs. 300,000 worth of school supplies for school children of low income families in Jaffna. This effort materialised as a result of the friendship between Mr. Tharmarajah of Jaffna and Mr. Karunadasa Welikala of Galle, who are members of their respective DIRCs.

To help Galle DIRC to distribute the school supplies and to strengthen relationships between the North and the South, NPC organized a visit to Paramankirai village. Twenty two Galle DIRC members and 22 youth representing other DIRCs took part in the visit along with six religious leaders from Colombo DIRC.

The group distributed the school supplies at the Paramankirai primary school in the Kilinochchi district. DIRC members from the South managed to communicate with the villagers and Jaffna DIRC members despite the language barrier, with both communities voicing the importance of peace and harmony.

The group then went to Navakkuli College for a volleyball match where youth from the South and a youth group from Jaffna played as mixed teams. The players worked together to play the game and win the match despite language barriers. At the end of the match the young people were seen exchanging telephone numbers which they later used to create a WhatsApp group called reconciliation visit to continue their new friendships with friendly banter and exchange of news from their daily lives.

Later they took part in a cultural event organized by the Jaffna DIRC where they experienced different cultural practices with songs, dance and cooking demonstrations which gave participants an insight on how pluralism is embedded in the country’s history.

After visiting Nagadeepa and a shopping trip to Jaffna town to buy souvenirs, the visitors left for home. The relationships built during the visit would inspire them to help build a pluralistic and peaceful Sri Lanka.

The exchange visit was organized under NPC’s project Plural Action for Conflict Transformation (PACT) funded by MISEREOR and CAFOD.