An United Front to Build a Pluralistic Society 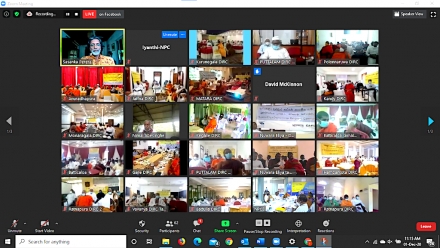 Over 500 religious leaders and civil society activists from around the country took part in a National Inter Religious Symposium on Building a Pluralistic Society organized by NPC under its project Consolidating Ongoing Multi-Level Partnership Actions for Conflict Transformation (COMPACT).

It was a virtual symposium in keeping with restrictions imposed by the government preventing large crowds from gathering in one place to stop the spread of COVID-19. Participants from the 16 districts where District Inter Religious Committees (DIRCs) operated joined the symposium through the Zoom application.

Speakers at the symposium included Professor Sasanka Perera from the South Asian University in New Delhi, lawyer Mr. Jagath Liyana Arachchi and NPC Executive Director Dr. Jehan Perera while many prominent religious leaders delivered messages on the importance of building a pluralistic society to ensure sustainable peace and harmony in the country.

After the main sessions, religious leaders and civil society activists from 17 districts including Colombo discussed provisions that should be included in the new constitution that were necessary to build a harmonious and pluralistic society with strong institutions.

The recommendations will be compiled into one document and presented to the National Constitutional Reform Committee to be considered in the forming of the next constitution.