Focus on Youth for Peace Building and Reconciliation 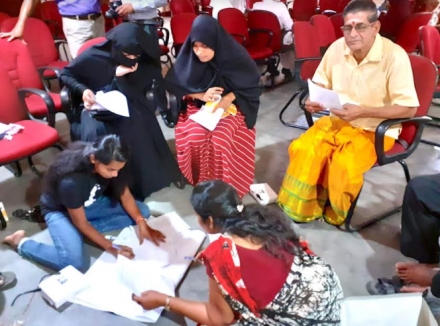 The participants acknowledged the need for an integrated school system where school children were given opportunities to interact with each other to familiarise themselves with other cultural and religious practices. This would help to diminish misunderstandings among the children, which they could use to educate their families and neighbours.

The importance of capacitating the youth by organizing capacity building workshops and training programmes to acquire skills for employment and self-employed was discussed.

Members from the Jaffna and Vavuniya districts revealed the escalating drug problem among adults, youth and school children, which has resulted in ethnic conflicts among the communities. While focusing on the core purpose of building peace and reconciliation, DIRCs also agreed on the need to resolve the economic hardships of the community. Among the proposals were trade fairs, market places for traders and businessmen from different communities and farms to cultivate the land.

“Terms like reconciliation, pluralism and cohesion are new to the Sinhala vocabulary. Instead of trying to create awareness through workshops and seminars, we must adopt practical approaches so initiating projects like community farming and markets is a good ideas to improve the economy while promoting the peace and reconciliation process,” said Janaka Ihalagoda, a Kegalle DIRC member.

"Most youth in Batticaloa have no money because they don’t have a stable income or employment. If we can organize skills workshops and capacitate youth from different communities to become
entrepreneurs and be self-employed, we can get them interested in other important topics such as peace and reconciliation,&quot; said A.S. Sharon from Batticaloa DIRC.