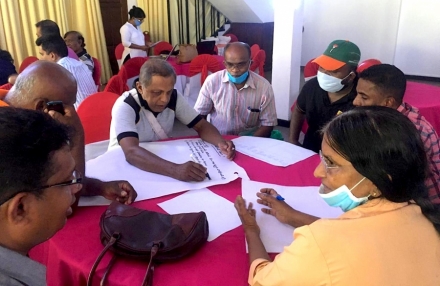 They agreed that it was important to create awareness among the public about democratic rights and how to be a responsible citizen and that bonds between women local government officials and women community leaders should be strengthened in order to resolve conflicts within communities. While focussing on the core purpose of building peace and reconciliation, the DIRCs also agreed to implement activities to resolve the economic hardships facing the community.

In the second session, the DIRC members were divided into groups where they discussed the gaps existing to promote peace and reconciliation as well as economic development. Activities that were proposed included a common market place for all communities, cultivating local produce and exchanging products between the South and the North.

A DIRC member from Hambantota said, “The 19th Amendment is necessary for a democratic country but many people are not aware of the benefits they receive from it and what they will lose by its abolition. The handout distributed by NPC on the 19th Amendment was extremely informative and I have distributed it among my friends, families and neighbours.”