Pluralism as a Means for Coexistence 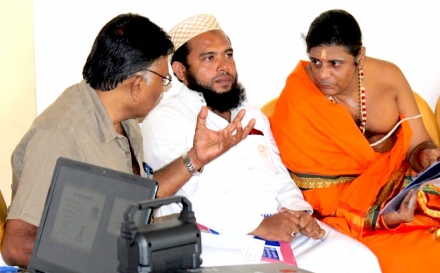 The training programmes were a part of six thematic trainings for each LIRC to capacitate institutional staff and community members with the knowledge, skills and attitudes to deal with localised conflict to promote and protect religious coexistence.

During the workshop, participants were told about pluralism, diversity and the differences of human beings based on geographical, ethnic and religious identities. Group activities were conducted to help the participants to better understand the concepts. The event was coordinated by the CERF regional partner, Butterfly Peace Garden.

“How can a person who owns only five perches of land divide it among his family after five years? It will not be enough. We should work collectively to resolve this issue. We should use this committee to facilitate such dialogue between the two communities,” said Father Rajan Rohan.

“We respect the right of every citizen to live where he or she desires. If people choose to move into a Muslim neighbourhood, we will welcome them with open arms. However, the government’s forced settlement of Sinhalese families within predominantly Muslim and Hindu areas still persists. This practice does not foster either pluralism or coexistence. On the contrary such practices are detrimental to the unity and cohesion among religious and ethnic communities.” said Moulavi K.L.M. Anees.

The objective of the Rule of Law training was to create awareness on rule of law, and to encourage the community to solve issues and undertake mediation.

The training on Conflict Transformation in Trincomalee was coordinated by the Serving Humanity Foundation, Trincomalee, CERF’s regional coordinating partner.

“Sri Lanka is a multi ethnic and multi religious country. As such, it is important that we learn about diversity and the issues that are likely to arise as a result of these differences in order to navigate such issues to reach a mutually acceptable solution,” said Moulavi M. Yaseer.

“My Grama Niladari division has residents belonging to all ethnicities. It is good for me to learn about dealing with conflict while being sensitive to each group’s needs. We have been practicing conflict mitigation as well as transformation but with limited theoretical knowledge. In this training programme, I hope to gain more knowledge and skills to improve my capacity to provide a better service to the community,” said Kasun, a Grama Niladhari.

“As state officials, we deal with community level issues on a daily basis. Having the conflict transformation tools which we discussed at our disposal is certainly advantageous in many situations.” said Aruchchelvi, a Grama Niladhari.

CERF also carried out a social media campaign on Facebook before the parliamentary elections to motivate citizens to vote for candidates who promoted ethnic and religious harmony. Six voice cuts were taken from members of Negombo LIRC and the videos were posted on Negombo LIRC’s and NPC’s Facebook pages. These campaigns had a wide outreach.