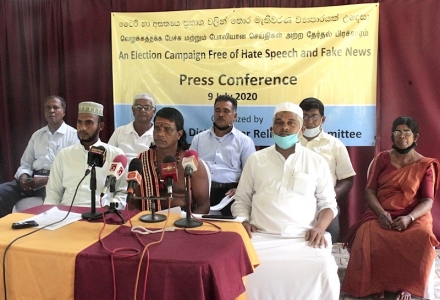 Several media conferences were held in several districts organized by District Inter Religious Committees (DIRCs) and Civil Society Organizations (CSOs) to promote an election free of hate speech and fake news in order to protect democracy and strengthen the ongoing peace and reconciliation process in the country.

Religious leaders and civil society activists condemned politicians who spread fake news and hate speech to increase their potential voter base. They emphasised the importance of voting sensibly and electing parliamentarians who were capable of forming national policies that could help the country to move forward economically while strengthening its peace building efforts.

The media conferences also created awareness on the importance of protecting the 19th Amendment and strengthening independent commissions in order to ensure democracy in the country.

The conferences have been held in the Kandy, Puttalam, Kegalle, Anuradhapura, Polonnaruwa, Nuwara Eliya and Matara districts and will continue during the election campaigning period.

They are supported by NPC’s Consolidating Ongoing Multi-level Partnership Actions for Conflict Transformation (COMPACT) project, which is funded by Misereor.