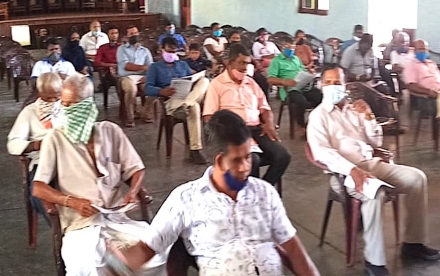 A Civil Society Platform (CSP) meeting was held in Anamaduwa with the participation of 75 civil society activists.

A panel consisting of NPC Project Manager Mr. Saman Seneviratne, Head of PAFFAREL Mr. Rohana Hettiarachchi and lawyer Mr. Prabodha Rathnayaka spoke on the importance of strengthening independent commissions, the damage cause by hate speech and fake news to peace and reconciliation efforts in the wake of an election and the role of the civil society during the pandemic lockdown recovery while preparing for the general election.

The panel discussion was followed by a session where participants raised questions about the importance of protecting the 19th Amendment and the need to promote women’s representation in responsible roles in the country.

The CSP is an initiative supported by NPC under the project Consolidating Ongoing Multi-Level Partnership Actions for Conflict Transformation (COMPACT). The meeting in Anamaduwa was funded by the Open Society Foundation (OSF).

The CSP also convened a media conference to promote an election campaign free of hate speech and fake news.

Panellists from the meeting held earlier spoke out against election campaigns using hate speech and false statements, and urged that those who promoted racism and religious extremism to be brought to justice.

They also urged people to demand that election candidates make their personal financial details public to promote a more transparent election campaign, and to vote for candidates who would contribute to forming national policies instead of selecting candidates who have done them personal favours and services.