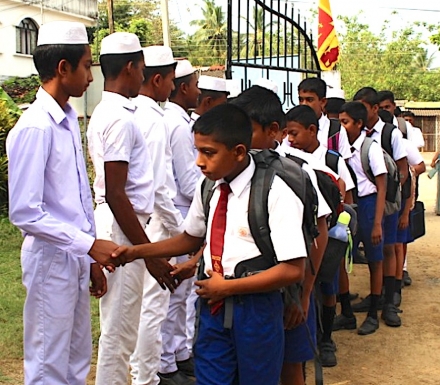 The solidarity visit to the Hambantota district, aimed building friendship and trust among Sinhala and Muslim students, their parents and teachers, was organized by Hambantota District Inter Religious Committee (DIRC) in collaboration with schools in the area.

In the morning, the students went to a mosque and learnt the different customs and rituals of the Islamic religion. The visit included games and activities such as dancing that allowed the students of both communities to interact with each other.

The visit to Kurunagala was organized by Kurunagala DIRC in collaboration with civil society organizations and government institutions. There were cultural events, team building games and discussions on religious and ethnic harmony.

A police officer said the visit gave participants the opportunity to interact with each other and become friends through the different interactive activities, a unique experience which he had not seen at other peace building programmes he had attended before.

The visit ended with a musical programme by Jayathilaka Bandara, who sang Sinhala and Tamil songs on the beauty of diversity and the importance of religious and ethnic harmony in Sri Lanka.

The visit to Polonnaruwa was organized by Polonnaruwa DIRC with the collaboration of government institutions and inter religious leaders and included several interactive games and activities that allowed the participants to bond with each other.

A Sinhala female participant said that this was first time she had the opportunity to interact with Muslim women and that it had diminished the fear and suspicion she had towards Muslims.