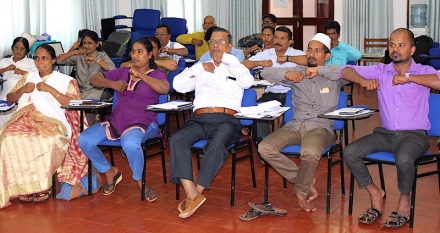 A two day training workshop on conflict sensitivity and conflict analysis was conducted under NPC’s project Religions to Reconcile: Strengthening Inter-Religious People-to-People Community Engagement for Reconciliation and Social Cohesion in Post-Conflict Sri Lanka, which is supported by the United States Agency for International Development (USAID), the U.S. government’s development agency.

Each DIRC identified an issue affecting religious and ethnic harmony in their areas and applied the tools they had learnt. Each group presented its case study and the trainers analysed and discussed each case.

Mannar DIRC members looked at the tension between Hindu and Roman Catholic communities at the Tirukethiswaram Temple. Ampara DIRC spoke about how the DIRC worked with state officials to release land taken over by security forces to build a car park.

Galle DIRC members identified the issues in tensions between Sinhala and Muslim communities in Samagiwattegama while Puttalam DIRC discussed how they had intervened to settle a problem related to the unlawful takeover of community land by a church. Matara DIRC analysed the dispute between a Hindu kovil and a neighbouring sports club, who were up in arms over a noise complaint.

“This is a practical training based on real issues. It is only when we actually do work based on a real situation that we are able to understand what the training is about and apply it in our daily life,” said K. S. Lankathileka from Deniyaya.

“Very often we go for training programmes where we learn many things but there is no practical application of the skill. Here we were able to actually apply what we learnt; that is an important aspect in any training,” Peter Sinclair from Mannar.