Preventing and Managing Conflict at the Grassroots 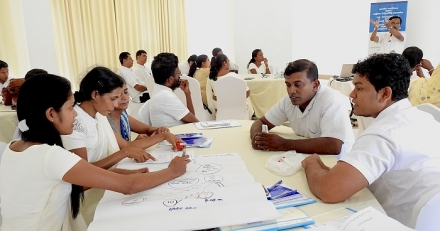 The programme aimed at providing participants with a comprehensive understanding of the concepts of conflict sensitivity and early warning, dealing with conflict and conflict analysis tools as well as how to develop a process to identify community level issues and refer them to the Local Inter Religious Committee (LIRC) of Weligama, which was established under the project. During the programme, 47 state officers were trained on conflict identification, prevention and management and an official data base was set up.

“Conflicts play an important role in today’s society. As Grama Niladhari officers, we have to intervene to resolve conflicts at the village level. Therefore, it is important to learn how to identify, prevent and manage them. I will apply the knowledge gained from this programme to my work so I can be more efficient,” a Grama Niladari said.

Under the same project, a cohesion activity to celebrate Thai Pongal was held in Weligama with the participation of 100 community members of the Hindu community, religious leaders, school children and government officials.

The Hindu participants said that it was the first time they had celebrated Thai Pongal with the collaboration of the government and with the participation of Sinhala and Muslim community members.

The CERF project also conducted a training programme on community mediation for Vavuniya LIRC members attended by religious leaders, government officers and civil society activists. The objective was to give them an understanding of mediation and its processes and to provide them with the skills to engage in mediation as soon as conflict arises.

Beruwala, Negombo, Weligama and Mannar LIRCs held their first meetings of the year to develop action plans for 2020. They also identified prevailing issues related to religious tension and designed interventions during the meetings.