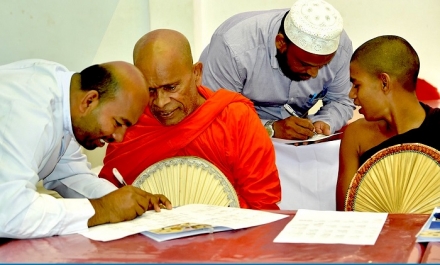 The CERF project is aimed at promoting religious freedom within the framework of pluralism and the rule of law and is being implemented in the Vavuniya, Mannar, Kandy, Badulla, Kalutara, Gampaha, Matara and Ampara districts.

During the 24-month project, local inter religious groups are engaging with police officials to ensure that people are able to practice their religion freely in areas identified as possible sites of tension. The lessons learnt will be taken to national and local levels for replication.

In Trincomalee, the inauguration of the LIRC was attended by religious leaders, community police officers, Grama Sevaka officers and civil society activists.

Trincomalee Divisional Secretary, Mr. J. S. Arulraj, said that the formation of the LIRC was necessary because the different ethnic and religious communities mistrusted and feared each other. “Although there are no serious religious tensions in Trincomalee, NPC’s initiative will bring all communities together in order to maintain a safe environment for all,” he said.

Participants pointed out that despite living side-by-side, the different communities did not engage with each other.

Also under the CERF project, an orientation meeting was held to explain the project details and to develop an action plan to set up the Rakwana LIRC. The meeting was attended by religious leaders, government officers and NGO and CBO representatives as well as media personnel.

The Godakawela Divisional Secretary, Ms. D.P.G. Renuka, said that it was important to set up a local level platform to promote religious coexistence in Rakwana, which was home to different religious and ethnic groups.

She expressed her willingness to support the LIRC. Many participants emphasised the need for building trust and understanding across all religious and ethnic communities in the area.

Chief Incumbent of the Sabaragamu Province Vihare, Ven. Panane Saddathissa Thero, said that it was everyone’s duty to bring people from all religious and ethnic communities together for social cohesion. He added that Rakwana LIRC would play a significant role to promote religious pluralism in the area.

One issue discussed at the meeting was unethical conversions to Christianity for money. However, it was pointed out that conversion was a matter of religious freedom.