Solving a Dispute Through Discussion and Non Violence 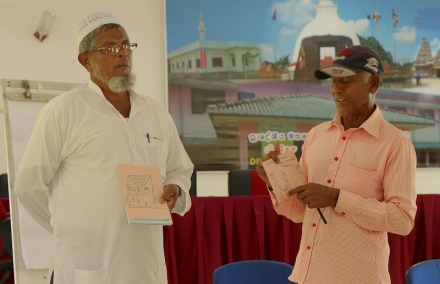 Under its Social Cohesion and Reconciliation Activity (SCORE), NPC conducted a series of dialogues on building a better future through memory in the Seruwila area.

A mixed village dialogue for the Navakkenikadu and Sumedankarapura Grama Niladari Divisions of Seruwila was held to resolve a conflict between the two communities over grazing land while encouraging them to resolve problems in a non-violent manner with empathy and compassion based on past experiences.

NPC conducted a series of dialogues for both communities separately in August and September. The mixed community dialogue was a result of an agreement to come onto one platform to discuss the issue. As a result, two committees were appointed in both villages and possible solutions were taken into consideration.

The participants who attended the dialogue knew about the dispute and understood the social, political and economic causes that led to the situation. Both parties accepted the fact that the wrongdoing had been done by a small group of people while emphasising the fact that others were honest and respectable people. Insufficient support by the government to solve the land issue was criticized.

According to the participants, both parties have lived peacefully with each other. They had done their best to prevent the conflict becoming ethnicity-based. Most people were positive about the suggested solutions and if these were implemented, there would be no repetition in the future.

“This problem is between two ethnic groups. The facts become distorted because of this. Both groups are trying to justify their actions. The mistrust, which is based on ethnicity, has led to unnecessary problems. However, I appreciate the fact that both communities have come up with possible solutions to solve this conflict,” said President of the Village Development Society of Sumedankarapura, Mr. M.K.L. Senarath Bandara.