Waiting for an Answer Ten Years On 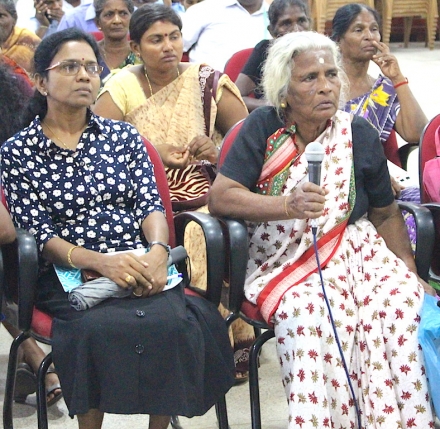 Information sessions for government officers on ethics, human rights, the Right To Information (RTI) Act and the Office on Missing Persons (OMP) were held in Jaffna under the National Peace Council’s project Accountability Through Community Engagement and Initiatives for Transition (ACE-IT), funded by the European Union.

The aims of the sessions were to educate civil society and state actors about the purpose of the new laws and institutions aimed at achieving Transitional Justice and empowering those whose rights have been violated to use new and existing mechanisms.

People who had been affected by the war were also invited to participate in the sessions and some of them told their stories.

Valipuram Pawalakodi, 70, is from Naguleashwaram in Jaffna. In 1990, the war came to her village when it was attacked by the security forces. When the fighting started, Pawalakodi and her husband ran to another village.

“My husband decided to go back to our village and get some clothes from our house. That was the last time I saw the man I loved and married. It’s 2019 and still he has not returned,” she said.

Pawalakodi waited for her husband to come back but the situation was getting worse so she moved to the Vanni. The couple had married against the wishes of their families so they had no relatives to turn to. They had built a house but it was now in the high security zone so she could not go back.

To make a living, Pawalakodi started selling gram and seeds. She is still waiting and dreaming that her husband will come back to her one day. At the very least, she wants to know what actually happened to him.

“Will I get a response before I cease to exist in this world?” asked Pawalakodi. Her last wish is to live in her birthplace where she belongs and to be buried in her home soil.