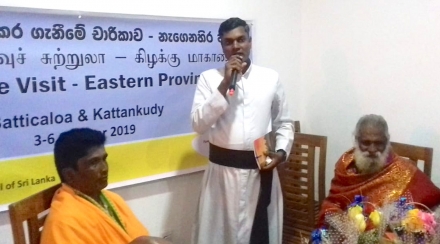 Religious leaders and representatives of Community Based Organizations (CBOs) belonging to District Inter Religious Committees (DIRCs) from 16 districts participated in a four-day exchange visit to Batticaloa and Kattankudy.

A variety of activities and discussions with farming and fishing communities, religious leaders, media personnel and war victims allowed participants to experience the Eastern province and the lives of its people.

The first stop of the visit was Polonnaruwa where the group met members of Polonnaruwa DIRC and exchanged views about the situation of each district after the April Easter Sunday attacks and discussed how DIRCs had helped to ease tense situations with the help of the government officials and the police.

In Vakarai, participants met a farming community in a rural village who had suffered during the war and were still looking for missing relatives and listened to their difficulties. An urgent issue they raised was the spread of drugs in the village and how it was adversely affecting the youth. DIRC members promised to bring these problems to the attention of relevant authorities to find solutions.

In Batticaloa, the group visited a Buddhist temple, which had a Kovil on its premises. The chief monk said that the Kovil was built on temple land to foster unity and harmony among Buddhist and Hindu people who lived in the area. This proved to be a success as devotees of both religions visited the temple and the Kovil.

During a visit to a fisheries community, the group discussed problems faced by villagers who had minimal resources. DIRC members gave them advice on the best ways to solve their difficulties and suggested that they joined Batticaloa DIRC.

On the final day, 122 religious leaders and CBO leaders attended an Inter Religious Peace Conference organized by NPC with the collaboration of the Jamiyyathul Uluma branch of Kattankudy.

The religious leaders spoke about the values in their respective religions that promoted peace and harmony while exchanging experiences about different DIRC best practices from each district.

The participants said they were pleased to attend such a conference that promoted peace and harmony among all citizens of Sri Lanka.