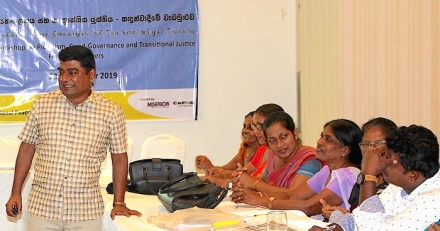 The objective of the workshops was to provide a comprehensive understanding of the issues to local government representatives so that they could be involved in reconciliation building projects with effective outcomes.

A member of the Matara Pradeshiya Saba said that although she had been a member of the Pradeshiya Saba for 25 years, she had never had a proper understanding of good governance or the other topics that were discussed at the workshop. She believed that she would be able to incorporate her knowledge when planning reconciliation-building programmes for a better outcome.

A member of the Moneragala Pradeshiya Saba said after taking part in the workshop, she had a proper understanding on what pluralism, TJ and good governance were. It made her realise how ineffective and wrong the current political system was, especially the party politics system where people were more concerned about voting for a specific party instead of voting for the good of the country. This system and attitude needed to change, people should be more involved with the politics of the country and try to make collective decisions through discussions, she said.

Participants from the Matara workshop suggested conducting the workshop for Buddhist religious leaders who were insensitive to the reconciliation process. Many participants emphasised the need for changes to different structures of society to bring about reconciliation in the country.