Enabling Communities to Participate in the Reconciliation Process 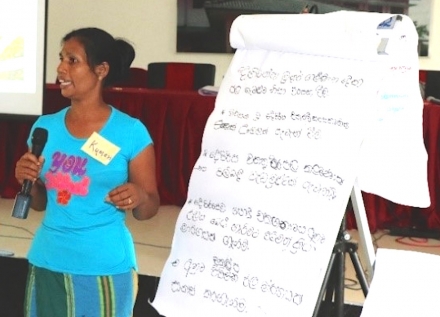 The workshop aimed to enhance the capacity of the communities to engage constructively in the reconciliation process.

Forty seven community leaders were selected for the activity, which was conducted by Aruna Jayathilaka, a lecturer at the Sabaragamuwa University of Sri Lanka with training experience on Conflict Mitigation.

The community connectors of Seruwila took part in the training and supported as co-facilitators for the training. The participants learnt to identify the concept of conflict and tools for conflict analysis that included Conflict Tree, Time Line, Conflict Mapping and Onion Model.

The workshop concluded with a session on what conflicts prevail in the Seruwila division and which of the methods could be used to resolve these conflicts in an enlightened way.

Some of the initiatives suggested by the participants as solutions to solve conflicts within communities included establishing peace initiatives groups in villages, that all religious parties should cooperate in collective engagements, that everyone should participate in all cultural activities, that people should learn all three languages, that official work should be conducted in all three languages, that psycho-social activities should be held in conflict affected areas.

“The training was in both Sinhala and Tamil so we were able to express our ideas in our own language. One of the biggest problems we have is the language barrier. We can find solutions for these problem through these types of programmes,” said T. Rajmohan from Ariyamankeni.