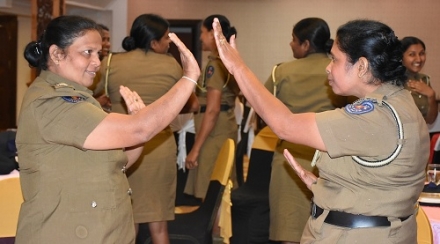 A series of workshops to sensitize women police officers attached to the Women and Children’s Desks in 11 districts began under NPC’s project Accountability through Community Engagement and Initiatives for Transition (ACE-IT). The policewomen were taught how to interact with human rights abuse victims seeking their help and counsel them on various tools that help to increase their ability to listen and act.

The project is supported by the European Union (EU) and implemented in collaboration with NPC’s partner organization, Right to Life. The work in the districts is centered on the Human Rights First Aid Coordinators (HRFACs) that give assistance to victims of human rights abuses.

As part of the project intervention, NPC works with victims of human rights abuses and encourages and supports them seek help from existing state institutions and mechanisms, and those set up under the Transitional Justice (TJ) framework.

Tools for women police officers included meditation, activities to awaken the senses including breathing exercises, sound bowl therapy and yoga, practical tutorials on empathy building, ethics and attitudes, discussion on tasks and functions of victim support personnel and counselling skills including listening and being attentive.

NPC completed training programmes for women police officers in Gampaha, Hambantota and Badulla Districts. Officers shared on-the-job experiences through play acting. They used a situation from the field and showed how they handled it. Group members discussed their methods with the trainers and how they could improve themselves using the skills they had received.

During discussions it was revealed that women officers were unavailable at the desks in the evenings because they went off duty at 5.00 pm. The desks were then managed by an available male officer at the station who had little or no training on managing Women and Children’s Desks.

The officers requested NPC to share the training with higher level male and female officers to sensitize them on pre-requisites for being on a Women and Children’s Desk.

Some of the issues discussed included the lack of women police officers to manage desks, the tedious task of manually entering full complaints that takes close to an hour, and the backlog of complaints requiring inquiries.

Women Police Sub Inspector W. Guneratne of the Nittambuwa Police Station said, “The training not only sensitizes us towards victims but also makes us look at our own actions in retrospect. We are beginning to realise that in the future we may be able to handle some situations differently.”