Drama Depicts the Value of TJ in Strengthening Reconciliation 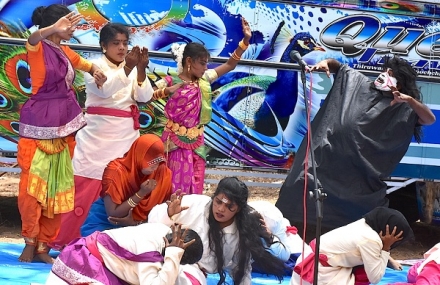 The project is supported by the United States Agency for International Development (USAID), which is the U.S. Government’s development agency.

The aim was to share knowledge on TJ through an actual event rather than a typical training programme.

The activity went beyond traditional knowledge sharing approaches on TJ and focused on practically applying the theories that had been learnt. Events included celebrating religious occasions, memorialisation programmes, cultural events, and an activity to acknowledge loss and share sympathy. In Kilinochchi, a street drama combined elements of creativity with empathy building to promote TJ.

The event was held in the seaside town of Nachchikuda, about 30 kilometers from Kilinochchi town, which was known for on going conflicts between Muslims and Catholics. Violence had risen recently due to the Easter Sunday attacks.

The four pillars of TJ and institutions supporting the TJ framework in Sri Lanka were presented in verse by the singers in the drama troupe. The drama presented the general lack of attention given to war victims and the misconceptions propagated, which were presented in the form of the devil.

In the end, the general public defeated the misconceptions on TJ and accepted that TJ was the only way forward. The drama ended with the nation being united as one, addressing a serious concept through a simple presentation, which enabled the audience to understand the issues presented.