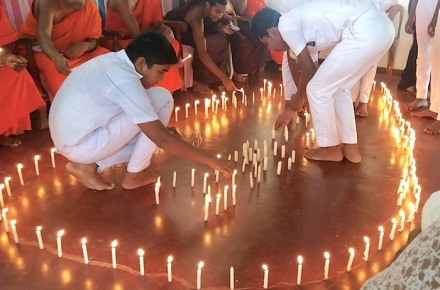 Hambantota DIRC organised two public events in Hambantota and Tangalle to remember those who had died in the Easter Sunday attacks one month earlier. Government officials and community police helped to organize the event, where religious leaders prayed for the victims.

The candle lit vigil in Hambantota, a mainly Sinhala district but where many Muslims lived in the town, was held in a temple. Moulavis, Christian priests and Buddhist monks participated along with members of the Sinhala and Muslim communities.

A senior police officer said that because of false information, it was difficult to manage security issues because some people were taking the law into their own hands. He gave the example of where the law said a person could not cover his or her face but Muslim women were sometimes being forced to remove their headscarves. He urged people to provide information to the police.

The Divisional Secretary said he appreciated the support given by people to reduce tension in the district. He pointed out that discussions and activities should also be held at the village level, adding that the LIRC’s vigil was the only such activity being held to commemorate the victims of the attacks.

Members of the Muslim community said they appreciated the opportunity to participate, as they were feeling isolated and fearful of a backlash since the attacks. The Moulavis pointed out that Islam did not condone the killing of human beings. They promised to rehabilitate those who had been radicalised and had a wrong view of the religion.

The Christian priests stressed that discussions on reconciliation should be on going and urged DIRC members to act to prevent any harassment of Muslims.

The Buddhist monks wanted to reduce tension and prevent any violence against Muslims. They said the attacks had disrupted the coexistence that had existed and which now had to be rebuilt.

A similar vigil was held in Tangalle with the Buddhist monks and Sinhala people. Three Community Police officers facilitated the session, which was also attended by a psychologist.

The Community Police urged people not to take part in violence against Muslims while the psychologist explained the behaviour of violent people and gave advice on how to avoid contributing to tension.