Enhancing Knowledge on Human Rights and the OMP 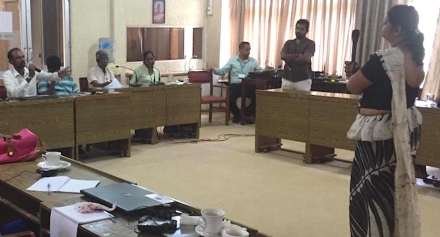 A meeting to enhance the knowledge of Human Rights First Aid Coordinators (HRFACs) on human rights, Transitional Justice and the Office on Missing Persons (OMP) was held in Colombo under NPC’s project, Accountability Through Community Engagement and Initiatives for Transition (ACE-IT). Thirty two participants from 11 districts attended the meeting, which was organized in partnership with Right to Life Human Centre (R2L).

Project Manager Venuri De Silva said that the lack of knowledge on enforced disappearances and the OMP had weakened the process of truth seeking, so HRFACs should empower victims by enhancing their knowledge to enable them to obtain their rightful benefits from the OMP.

R2L Executive Director, Philip Dissanayake, explained the current situation in the country and the impact of the Easter Sunday attack. He pointed out that ISIS was a global terrorist threat and stressed the importance of the eradicating misconceptions about the Muslim community in Sri Lanka.

NPC Executive Director, Dr Jehan Perera, spoke on the importance of a united country to fight against global terrorism. He condemned discrimination against the Muslim community who did not support terrorism. He warned that marginalizing the Muslim community based on false rumours would push the country into another civil war. He criticized those who were trying to take political advantage of the situation.

Coordinator of Sri Lanka College of Journalism, Milroy Anthony, described the influence of social media in spreading violence. OMP Commissioner, Dr Nimalka Fernando, outlined the functions and powers of the OMP and explained the four pillars of Transitional Justice. Acting Director of Human Rights Commission of Sri Lanka, Menaka Herath, clarified the human rights provisions in the Constitution and answered questions raised by the HRFACs. Project Media Officer, Sudesh de Silva, spoke of the importance of a strategic approach in reporting news while R2L representative Vinoth Anthony explained the ethics of journalism.