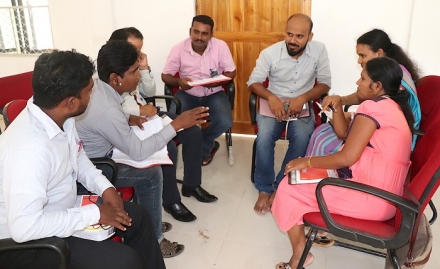 NPC conducted a one-day training session on the rule of law for Government officers under NPC’s project, the Social Cohesion and Reconciliation Activity (SCORE), which is funded by USAID and conducted in partnership with Global Communities.

To improve the local and national government institutions’ processes to promote social cohesion and reconciliation, NPC held the first training for the same government officers in January. Both training programmes were conducted by lawyer Jagath Liyana Arachchi.

There were 30 government officers representing all ethnic groups.

Mr Liyana Arachchi discussed various topics such as the concept of rule of law, fundamental rights and the citizen’s responsibility under the emergency law. There were group discussions to analyse case studies.

Most of the participants said it was a relevant training session as emergency law was currently prevailing in the country and getting to know the emergency regulations was useful.

“All of us were able to learn a lot from the training session conducted by NPC. One of the main aspects was that if the citizens of the country are nurtured by rule of law, then they naturally become lawful citizens. Therefore, if the law enforcement is strict, people will at least try to remain lawful,” said E.P. Jayasena, Grama Niladari officer of Samagipura Grama Niladhari Division.