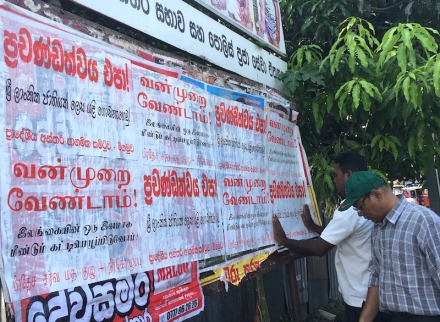 Local Inter Religious Committees (LIRCs) formed under NPC’s project, Collective Engagement for Religious Freedom (CERF), held a range of activities in six districts across the country to defuse tensions in the wake of the Easter Sunday attacks.

Mannar LIRC conducted an interfaith discussion on religious freedom, which brought together 50 participants including Christian and Islamic religious leaders, government and police officers and members of the media.

The discussion was organized as an effort to promote understanding about the shared values of the two faiths, emphasising the similarities in religious doctrines.

SSP Mannar, Priyantha Peris, stressed the importance of civic responsibility. “We should not point fingers at the whole Muslim community. It is only a few people who are extremists. We should be careful to identify the real threats. I have informed my officers not to apprehend any civilian without probable cause or to disturb their daily life,” he said.

During the meeting, the Moulavis explained to Christian leaders the Islamic teachings on the treatment of other religions and religious attire as well as about the rise of extremist factions within Muslim communities. Leaders of both faiths shared their experiences and knowledge on tolerance and inter faith harmony.

Many participants stressed the need for frank communication to spread the message of coexistence across all religious and ethnic communities.

Participants discussed possible interventions that could be initiated through the support of the LIRC to prevent the incitement of violence between the Christian and Muslim communities in the area consequent to incidents of communal violence in other parts of the country. Police officers as well as the religious leaders commended the LIRC for its efforts in preserving harmony.

Addalaichchenai LIRC held a special meeting to discuss the current situation and to design future interventions to be implemented for the communal conflict mitigation.

In Negombo, LIRC members discussed future interventions to be implemented in order to ease the tense situation. They put up posters that said “Say No To Violence! Let’s rebuild as a Sri Lankan Nation”.

Weligama Divisional Secretariat in collaboration with the LIRC organized an awareness programme on social cohesion, conflict sensitivity and conflict mitigation with the participation of 60 religious leaders and 800 community members. LIRC members planned to hold a discussion with religious leaders of all faiths to rebuild trust. Community awareness programmes on social cohesion will also be organized.

In Beruwala, the LIRC will facilitate a community awareness programme on conflict sensitivity, conflict mitigation and social cohesion. Members of Community Policing Committees are expected to attend.

Vavuniya LIRC members facilitated a special meeting with religious leaders, civil society representatives, police officers and government officials to discuss the current situation and provide an avenue to cultivate trust and understanding between the two faiths. Participants decided to have an awareness session for the public to remove misconceptions and to tell them about the steps taken to ensure their safety.