Importance of Continued Engagement in Times of Stress 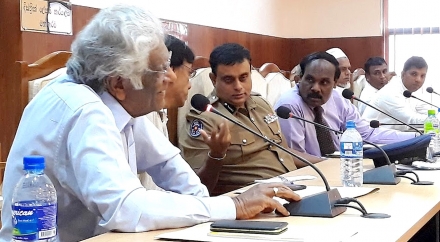 NPC along with its partner the Centre for Communication Training (CCT) visited to Mannar shortly after the Easter Sunday bombing to meet with the District Reconciliation Committee. These were set up two years ago when President Sirisena in his capacity as Minister of National Integration and Reconciliation, got the Cabinet of Ministers to grant approval to establish District Level Reconciliation Committees (DRCs) to address the incidences of inter religious and inter ethnic tensions and to promote national integration and reconciliation in all 25 districts.

The functions of the DRCs were to undertake study on the background and causes of religious and ethnic tensions in the locality; formulate suitable strategies and approaches to mediate the problems; provide rapid response to resolve conflicts and tensions; invite the perpetrators and victims and facilitate conflict resolution; maintain database on incidence of tensions and attacks on religious places; mediate, negotiate and resolve conflicts and prevent hate speeches.

The DRCs were to be convened by the District Secretary of the relevant District with representation of inter religious leaders, the Superintendent of Police, retired Judges, School Principals and other relevant officials as observers. These are all prominent persons at the community level who are expected to be able to contribute towards social harmony and peaceful coexistence. But they have still to be activated. At the present time they can be a valuable mode of engagement between the communities so that no one community feels it is being marginalized or excluded. The meeting at the Mannar district secretariat was between the government officers working at the secretariat, civil society and religious leaders from all communities and the police.

The role of the DRCs in keeping all communities together through engagement with each other, and without isolating any one community was highlighted on this occasion. Their role in keeping the communities integrated even as the problem of violent extremism was addressed was the theme that had the most resonance with those present at the meeting.

The lessons learnt about coping with violent extremism during the previous conflict with the LTTE was alive in the consciousness of those gathered at the district secretariat. This was evident when a lawyer present on the occasion who claimed that there had been many arrests made in Mannar and there was a danger of innocent persons being detained, which the police was responsive to without a knee jerk rebuttal of the claim. This reaffirms NPC’s conviction that there needs to be more engagement between the communities in this time of extreme stress and anxiety rather than less.