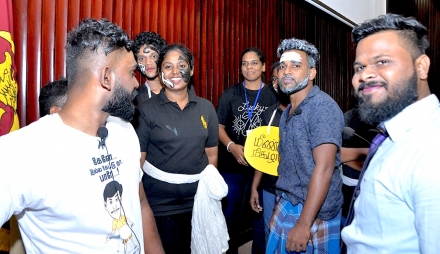 Young people from 12 universities and 21 districts across the country met in Colombo for a three day Youth Peace Champions Event under NPC’s project, Youth Engagement with Transitional Justice for long lasting peace in Sri Lanka.

The project is funded by the UN Peace Building Fund with support from Legal Action Worldwide and the Harvard Law School.

The event showcased creative initiatives by the students to explain the concepts of Transitional Justice (TJ), dispel the many misconceptions and carry the correct version to the grassroots. They used dramas, debates, workshops, short films, interviews and surveys.

Speaking at the event NPC Executive Director, Dr Jehan Perera, said that there was a great lack of awareness about TJ, so the greatest challenge was to educate the public.

“We have to take the difficult message of Transitional Justice, of dealing with our divided past and trying to create an unified future,” he said.

The UN Secretary General’s Envoy on Youth, Ms Jayathma Wickramanayaka, in a video message said it was the younger generation that had to live with the mistakes of their elders.

Young people were seen a perpetrators or victims of violence but they also made positive contributions to preventing violence, building peace and reconciliation. Most young people were natural peacemakers and it was this generation that could bring about change, she pointed out.

During the event, the students came up with over 100 recommendations on how the government, civil society, the UN, media and victims could contribute to the effective implementation of TJ and reconciliation in Sri Lanka.

They also had the opportunity to questions officials from the United Nations, the Secretariat for Coordinating Reconciliation Mechanisms, the Office on Missing Persons, the Office for National Unity and Reconciliation and civil society representatives on the progress and prospects for TJ in the country.

Working in groups formed according to the various districts, the young people discussed levels of awareness of TJ in their areas, what they had done to educate the public and the challenges they faced while taking TJ to the grassroots.