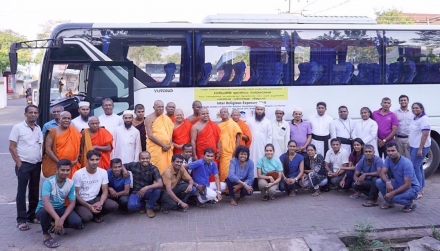 On the way to Mannar, visits were arranged to places of religious, cultural and historical significance, which included the Puttalam grand mosque, Thanthirimale temple, Madu church and the Mannar fort.
Discussions on the importance of lasting religious coexistence and inter faith harmony were held at each place where LIRC members expressed their thoughts and concerns on the issues.

When meeting war affected communities, the members from Weligama were distressed to hear about the sufferings of those who had lost their loved ones. Through group activities, a strong bond was created between the two committees, which will facilitate better learning and sharing. Each committee made a presentation about completed activities, challenges encountered and the lessons learnt.

Participants were taken to Talaimannar, where they spoke about their work on LIRCs. They also talked about their experiences during the civil war and how the war had affected them living in the North and the South. Weligama LIRC members gifted stationary items to primary school children in the area.

On the final day, a panel discussion was conducted with the participation of religious leaders and police officers. They spoke about the value of religious harmony and the teachings of each religion about coexistence.

One issue that was discussed was the tension in Mannar between Hindus and Christians over a decorative arch that was built by Hindus and destroyed by some young people. Religious leaders and police officers explained that social media users had spread misinformation, exacerbating the conflict. They stressed the importance of ethical media use.