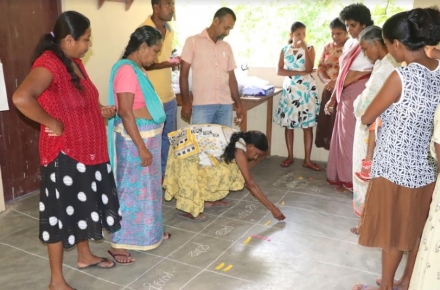 Under the Social Cohesion and Reconciliation Activity (SCORE) implemented by Global Communities in partnership with NPC, community assessments were done in the Moneragala and Jaffna districts to identify issues related to social cohesion and reconciliation as well as development issues in the villages chosen for the SCORE activity.

In this project, NPC is looking at conflict in a generic sense, keeping in mind that there are economic, caste-based and resource-based conflicts. From the Buttala Divisional Secretariat, the Puhulkotuwa village assessment was done by the Community Connectors of the Moneragala District. The Puhulkotuwa Grama Niladari (GN) division has three villages with 2,668 people.

During the assessment, the main issues raised by the community included the shortage of water for harvesting, lack of income generation for women and the absence of market space to sell items produced by the self-employed. The community does not have a common play ground, which has become an obstacle for the youth and children to spend their leisure time interacting with each other.

An alarming problem for the community was the growing presence of illegal drugs. The community, which is made up of mainly Sinhalese people with one Muslim family, also needs to be empowered to be more to be resistant to national ethnic tensions.

The community connectors of the Jaffna District prepared a conflict mitigation plan for the Illavalai Northwest GN division. The area has eight villages with 656 families consisting mainly of Tamil speaking Hindus and Christians.

The main issues that were brought up included a drinking water shortage, sea erosion and garbage problems. Suggestions for dealing with them included youth-led tree planting activities to reduce sea erosion, production of bio fertilizers with household garbage and plans to reduce plastic and polythene use.