Focus on Inclusion to Mitigate Conflict 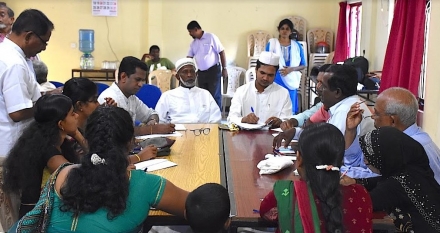 NPC’s project, Religions to Reconcile: Strengthening Inter-Religious People-to-People Community Engagement for Reconciliation and Social Cohesion in Post-Conflict Sri Lanka, which is supported by the United States Agency for International Development (USAID) - the U.S. Government’s development agency - has been extended for another year.

The project will continue its work with religious leaders and community leaders to address and mitigate religious and ethnic tension by working within the pluralistic framework.

During the extension period, NPC will carry out several new activities that fall within the framework of the ongoing intervention and seek to enhance the capacity of District Inter Religious Committees (DIRCs), sub groups and peace delegates, especially in the area of preparedness, to deal with violent conflict at community level.

The DIRCs and sub groups will continue with their mitigation work with refresher training on applied conflict sensitivity and conflict analysis. This will be complemented with training in Non-Violent Communication to enhance their communication ability and empathetic engagement.

Longer term mitigation will focus on chronic or emerging conflicts and inclusion. Three districts have been identified for this type of intervention: the intra community Tamil-Catholic and Tamil-Hindu conflict in Mannar; long term Sinhala-Muslim conflict in Ampara; and inclusion for people with disabilities in Puttalam.