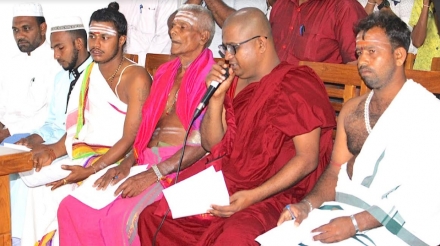 Forty four participants attended the project orientation meeting in Polonnaruwa where the objectives, expected outcomes and activities of the COMPACT project were explained and the current political crisis was discussed.

About 75 people from NGOs and trade unions, and religious leaders, attended a seminar organized by Nuwara Eliya DIRC on a Constitution to ensure the rights of the up country people held in Hatton, as a local level cohesion activity.

Civil activist S. Vishvalingam said the government should take steps to address the difficulties of plantation workers, who contribute a lot to the economy, such as the daily basic wage, housing, education and health.
Colombo University Professor Chandragupta Thenuwera called for the new Constitution to ensure the rights of plantation workers as citizens of the country. Up country people had been talking of labour rights for a long time, he pointed out.

Trade Union leader Saman Rathnapriya said that like India, which practiced multiculturalism and ensured the rights of the disadvantaged, Sri Lanka’s Constitution should guarantee the rights of all communities and enshrine pluralism to build a sustainable peace.

At the Puttalam local level cohesion activity, the government’s waste management project was discussed. The Muslim people opposed the idea of bringing waste from other places to their area. Since this could have developed into a conflict between Muslims and non Muslims, government officials asked NPC to arrange a discussion with religious leaders and community leaders. At the discussion, government officials explained the project and participants asked questions. A site visit was also arranged.