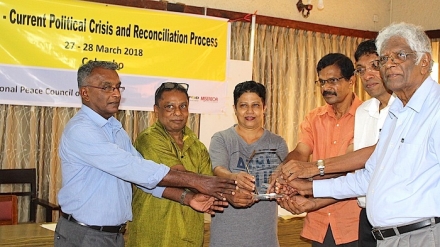 In the wake of the anti-Muslim violence that erupted in Digana and earlier in Ampara, District Inter Religious Committees (DIRCs) in several districts took immediate steps to ease the conflict situation.

Kandy DIRC, headed by coordinator Gamini Jayaweera, organized a press conference in the evening of the riots to request all communities and their leaders not to promote racism or resort to further violence. Several TV stations and print journalists attended the conference.

DIRC members engaged with religious leaders to reduce the tension since the beginning of the crisis. Along with film director Padmasiri Kodikara and actor Vishva Kodikara, they visited Digana and Teldeniya to ask people not to resort to violence and to care for victims.

They have planned a fact finding mission and a truth commission to collect information about the conflict in collaboration with Peradeniya University. They will submit a report to the committee investigating the conflict appointed by President Maithripala Sirisena.

Kandy DIRC provided information on the situation to government authorities including the police, the Presidential Media Unit and the Secretariat for Coordinating Reconciliation Mechanisms.

Ratnapura DIRC also held a press conference in collaboration with several civil society organisations to condemn the anti-Muslim attacks in Kandy and inform the public in order to prevent conflicts in the Ratnapura District. Several religious leaders participated in the press conference. Ratnapura DIRC members visited several mosques in the area to meet Moulavis and Muslim people who were afraid due to the violence.

Puttalam DIRC, along with Puttalam police, organized a dialogue with religious leaders and community leaders in order to minimize the tensions that arose because attacks on Muslims in Ampara and Digana.

The dialogue took place with the participation of about 200 people including 40 religious leaders of all faiths, high ranking police officers and officials from government institutions. They stressed the importance of maintaining peace in the district.

“We should not forget that many people lost their lives during the past three decades because of the war. I am happy that all the communities have come together to condemn what happened in Kandy and Ampara to communicate the importance of living in harmony to avoid another war. It is important to solve problems through talks. No religion tells us to indulge in violence,” said the Superintendent of Police in Puttalam.

Ven. Kudaweva Seelarathane Nayake Thero, Reverend Eranga, Sendararama Kurukkal and Moulavi Abdullah Alim pointed out the core values of their religions and the importance of living in coexistence. DIRC displayed by banner in front of the bus stand to communicate the significance of religious harmony.

Badulla DIRC met the District Secretary and agreed to support several activities including a dialogue with students on ethnic and religious harmony and distributing leaflets and displaying posters that opposed separation based on race and religion.

Hambantota DIRC met religious leaders and agreed to establish religious leaders' committees in collaboration with the police and the government officials. An awareness raising programs will be organized for Dhamma school students.

A meeting was held at NPC office in Colombo on the current political crisis and future of the reconciliation process, which was attended by DIRC members and partners from 16 districts. NPC Chairman Joe William presented an award to Kandy DIRC for its work to mitigate violence in Kandy.