Women’s Groups Join Up To Tackle The Language Barrier Featured 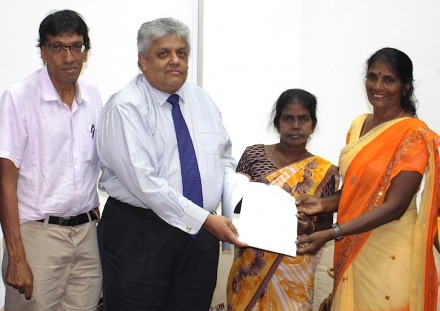 “Tell me anything but don’t tell me he’s dead,” were the words Kanmani muttered as she took out a letter from her bag, tears rolling from her eyes. “My son went missing in Mannar in 2007 and there is no place in this country I haven’t gone to find him, to see him one last time. I’ve been to every police station, army camp, government office and commission,” she says.
In 2014, Kanmani was informed about the Presidential Commission to Investigate into Complaints Regarding Missing Persons. She was one of the first people in her village to go before the Commission. “I will not lose hope, I know my son is alive somewhere,” she says.
She told the Commission everything she knew in her native tongue and the Commission contacted her twice via letters in Tamil. However on February 16, Kanmani received her final letter from the Commission in a language she did not understand; English. Living in a secluded village in Vavuniya, Kanmani knew no one who read or understood English. “I was helpless, I didn’t know where to go or whom to ask,” she recalls.
Kanmani is one of the many women NPC has been able to reach out to through its project Post Conflict Healing: A Women’s Manifesto supported by FOKUS Women. It was during an exchange visit to connect the North with the South that Kanmani told her story, only to find that many others had also received letters in English from the same Commission.
The women’s networks that NPC had established started a signature campaign to address this breach of the national language policy and to ensure that the government did not repeat the mistake.
The women’s groups collected over 1,400 signatures from across the country. On September 29, the first copy of the petition was submitted to Mr. Mano Tittawella, the Secretary General of the Secretariat for Coordinating Reconciliation Mechanisms (SCRM) of the Ministry of Foreign Affairs.
Mr. Tittawella promised he would ensure that such errors would not be made in future Transitional Justice mechanisms. He noted that letters needed to show empathy when giving details about investigations or information found about the missing person. He recommended that victims should be informed personally with psychosocial support instead through an impersonal letter that they did not even understand.
After the meeting at the Foreign Ministry Kanmani says she feels more secure about Transitional Justice mechanisms in the country and hopes that they will help her to find her missing son.
The women’s networks will raise the issue with other government authorities such as the Ministry of National Co-existence, Dialogue and Official Languages, Office Of National Unity and Reconciliation and Ministry of National Integration and Reconciliation.