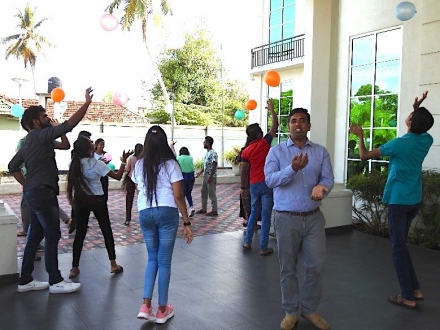 Recent religious violent extremism in the country arose as a result of mistrust among different ethnoreligious groups. The lack of mechanisms to identify and address conflict stressors that can lead to violence is a long standing issue. Civil society groups and community leaders have a greater responsibility to dispel mistrust and misconceptions and to rebuild relations among religious groups.

The Action for Religious Coexistence (ARC) intervention was designed after identifying this responsibility to capacitate targeted localities with an understanding of the importance of religious coexistence. The programmes on Preventing Violent Extremism (PVE) envisage enhancing the knowledge of youth leaders on the negative consequences of violent extremism, focusing on Youth Wings’ role in standing against extremist ideologies.

Hari Prasath, a member of the Youth Wing in Bandarawela believed that knowledge was the key to resolving most of the issues in society. “As a person who learnt about this for the first time, I realised the importance of understanding the negative consequences of violent extremism. Most of the time young people do not know about the past and make their assumptions based on the media, which is dangerous. Misinformation can prompt people to become extremists. By taking these training programmes to a wider community, we can create peacebuilders,” he said.

Extremist parties were involved in spreading misconceptions to create divisions among communities, which was why communities must learn the importance of religious coexistence. Dinuka Lakshan believed that joining the Youth Wing in Panduwasnuwara would empower him to counter violent extremism. “I learnt a lot. I realised how pull and push factors that emerge through the political, religious and economic issues create extremist ideologies. Parents, teachers and adults should educate younger generations on the negative consequences of violence. Parents should teach their children to respect others’ values and rights,” he said.

A programme on the rule of law was carried out for members of the Youth Wing in Rakwana. Participants were educated on the concept of the rule of law and how it linked with religious freedom by improving knowledge of the legal framework to drive the discourse on religious freedom. The facilitator used group activities to keep participants engaged.

Ashifa Thawoos, a member of the Youth Wing in Rakwana, said, “As a youth member I know opportunities to learn about the laws of the country are lacking. People do not know ways to seek justice when they face injustice. Educating communities on the constitution is needed. NPC has taken this initiative to empower communities by teaching them the importance of the rule of law.” Need assessments were carried out to find solutions for the concerns of communities in the process of strengthening religious freedom. The ARC team will use the findings of the assessments to design activities to find solutions for religious conflicts.