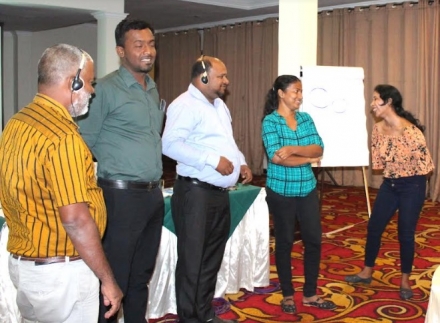 NPC Treasurer Prof. T. Jayasingam spoke on the problems faced by the people of the North and East and explained the measures people could take to build pluralism. Prof. Upul Abeyratne, NPC Executive Director Dr. Jehan Perera, and NPC Programme Manager Saman Seneviratne participated as resource persons. Dr. Perera discussed the current situation of the country and the role of NGOs. Prof. Upul Abeyratne explained the conceptual ideas of pluralism and inclusion. Mr. Seneviratne outlined the challenges and opportunities encountered in building a pluralistic society.

Other sessions included what NGOs are, the need for NGOs, different types of NGOs, why monitoring was needed, different types of monitoring and the challenges faced in monitoring and how to overcome them. The sessions were interactive and participants were enthusiastic and engaged. Several NGO coordinators said that special attention should be paid to the problems of minority groups and that there should be formal mechanisms for this. Others said that such workshops should be organized in their district as well.

In the evening there were cultural performances with singing of Sinhala and Tamil songs. “The topics discussed by the resource persons were very interesting. Most of the officials did not know about pluralism before the workshop. They told me that they had learned a lot,” Mr. Wimalagunarathna said.

Also under PACT, a programme to strengthen fellowship and harmony among Sinhalese and Muslims was organized by the Pangaragammana Sub Committee affiliated to the Badulla District Inter Religious Committee (DIRC).

Conflicts between Muslims and Sinhalese have escalated in the last few years in several areas including Pangaragammana. In order to relieve tensions, Badulla DIRC organized a programme for the Muslim community and neighbouring Sinhalese people. It was attended by 132 people including 65 Sinhalese, 63 Muslims, and four Tamil people. Religious leaders, government officials, local government officials and youth participated in the programme, which included shramadanas, cultural performances and discussions.

The young participants said that they had had an unique experience while older people believed that these programmes could re-unite the Sinhalese and Muslim people.