Learning a Second Language to Promote Peace and Reconciliation 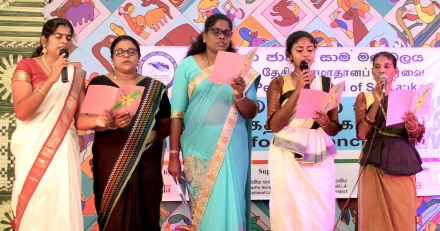 The certificate awarding ceremony for 43 participants who completed a Sinhala language course was held in Batticaloa under NPC’s Language to Reconciliation project funded by the Canadian government through the National Languages Equality Advancement Project (NLEAP). Ninety hour second language courses have been held in the Batticaloa, Gampaha and Trincomalee districts.

NPC Executive Director Dr. Jehan Perera said efforts of civil society had resulted in a reduction of distrust and suspicion among different ethnicities and religious groups. However, people were unhappy with government leaders because of severe economic hardships they were undergoing. The government should get a sense of the real needs of people, which could only be achieved by giving power to lower levels of government, Dr. Perera pointed out, adding that NPC would be taking measures to address the issue. The second language classes would be helpful to unite different communities.

Executive Director of Batticaloa Peace Garden, Father Paul Sathgunanayakam, said that to maintain a peaceful and reconciled society, the cultures and ethnic and religious practices of different communities should be understood and learning a second language was the way to do this. The Language to Reconcile project was effective as could be seen by the performances given by the participants, he said.