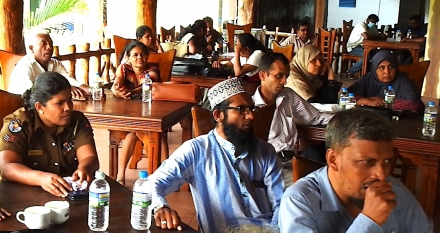 Religious conflicts in Sri Lanka have seen a steady increase with extremist parties spreading misconceptions to create divisions among communities to gain political advantages. Community leaders, religious leaders and state officials have a greater responsibility in mitigating existing conflict stressors to strengthen unity in their areas. In sustaining religious freedom within the framework of pluralism and the rule of law, it is necessary to empower these community leaders to carry out citizen driven initiatives. Carrying out need assessments for Local Inter Religious Committees (LIRCs) was a crucial effort that was taken by NPC’s Action for Religious Coexistence (ARC) team to identify the needs of areas subjected to recent religious conflicts.

The project carried out 16 activities in the last quarter in 11 locations reaching 419 LIRC members and 221 Youth Wings. Five capacitation programmes were carried out on Preventing Violent Extremism (PVE) and the rule of law targeting youth wings as well as 11 need assessments to determine the needs of communities and set priorities for future action in targeted localities. Through the rule of law training programmes, participants learn about the existing legal framework on religious freedom both domestically and internationally, which will enable these community leaders to drive the local and national discourse on religious freedom.

Mohomed Rikaz, a Youth Wing member in Vavuniya, said the rule of law in the country should be upheld as it was the foundation of development. He thought that regulations and acts that undermined the rights of minorities should be reformed to ensure inclusivity. “Rules, regulations and acts should be drafted to ensure the rights of the communities and not to undermine them. Legal experts should take actions to amend the detrimental laws of the legal system that can weaken the rights of disempowered communities,” he said.

Preventing Violent Extremism (PVE) is a crucial subject component included in the training to guide the Youth Wings to tackle violent extremism in their areas. The content was developed to enhance the youth wing members’ skills to design and carry out counter action to minimise the impacts of extremist ideologies.

At the training programme for 42 Youth Wing members in Mawanella, the significant role of youth leaders in mitigating religious violence was discussed while enlightening young leaders on how they could contribute to sustaining religious co-existence.

For LIRCs, as broad based community level platforms that enable dialogue, need assessments were carried out for committee members to find holistic solutions for their concerns. Giving priority to research based activity designing and implementation, the ARC team will use the findings of these assessments in designing upcoming actualisation activities and need based training.

Kanthi Gunawardana, former director of the Teaching Advisory Service in the Mawanella Zonal Education Office, is a member of Mawanella LIRC and a community leader who was looking for an intervention to make a change. During the past three months she has participated in ARC programmes and shared how she was inspired to contribute to strengthening co-existence in the country. She believed that a lack of a mechanism to mobilise community leaders discuss religious freedom had led to religious conflict in her area.

M. M. Anwar is a committee member of Panduwasnuwara LIRC. He suggested holding committee meetings at religious places to be close to grassroots communities. He explained the importance of field level interventions in terms of identifying the hidden issues in society. “We are going through the worst economic crisis we have ever experienced. In this time, violence can easily emerge. As LIRC members we should identify the immediate issues that can lead to undermining religious freedom,” he said.