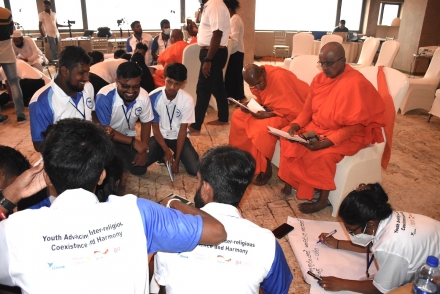 Since the end of the civil war, hate narratives and extremist ideologies spread by nationalistic groups and politicians have gradually changed the mindset of citizens to suspect other ethno religious groups. Trust among communities had been lost and furthered eroded by the Easter Sunday attacks, undermining religious coexistence. The tendency of youth to accept hate narratives has grown in recent years as a result of social media.

Eight NPC staff members were trained as trainers and, in turn, trained 42 youth representatives from 24 districts who were selected from District Inter Religious Committees (DIRCs), Local Inter Religious Committees (LIRCs), universities and other youth platforms, taking into consideration their leadership skills to make a change in their localities.

M.R. Nusra, who participated in the training in Nuwara Eliya, believed she had a special role in working against the extremist ideologies. “I realised how impactful my role is. As young leaders, we should take the lead in changing the attitudes of the people. It is not easy to fight against extremist ideologies but through the practical sessions in this training, I learnt that we could use different tactics and strategies to convey our message. I will share this knowledge with others,” she said.

M. R. Rifadh Ahmed is an active member of the Weligama Youth Wing. “This training enhanced our leadership skills as well as conceptual knowledge. Youth are the next generation who will make a change in society. We do not have many opportunities to learn new things or to share our opinions, so this training addressed that gap,” he said.
“Youth do not get many opportunities to participate in these types of trainings. As a youth leader, I am ready to share this knowledge with others and to be a part of the process of eliminating extremist ideologies in our localities.’’ Kosala Gunawardhane from Hambantota DIRC said.

Ashvini Selvaraja, a participant from Nuwara Eliya district, said, “Because of trainings like these, thinking patterns of my community have gradually changed. Earlier women were disempowered and helpless but now many women participate in these initiatives. I learnt how to take measures against violent extremism and I want to help other girls in my community by empowering them with knowledge,” she said.

As the last session of the programme, an inter faith dialogue was carried out with the religious leaders who shared their religious beliefs and values with participants, developing a discourse to understand how their religions have ensured inclusivity.

Father Sumith Weeramunda from Negombo Methodist Church stated that love and forgiveness were the fundamentals of his religion. “The whole world is suffering from various types of extremist actions. Violent extremism is the major reason for the poverty of most developing countries,” he said.

Kurukkal Dakshana Sharma said, “The whole world is one family. We should learn how to love and forgive others.” Ven. Kandegama Sumanasiri Thero from Weligama said, “We should learn to accept different cultural and religious practices. Without knowing of the teaching of other religions, we cannot make assumptions. Religious leaders should encourage their followers to learn about other religions. With the proper understanding, most disputes can be resolved.”

Muslim Mavulavi, Z.A.M. Faris condemned extremist parties involved in violence in the name of religion. He explained that Islam was a religion that appreciated peaceful coexistence. At the end of the session, the participants presented rituals, practices and activities in their religions that empower followers to tackle violent extremism and build cohesive communities.