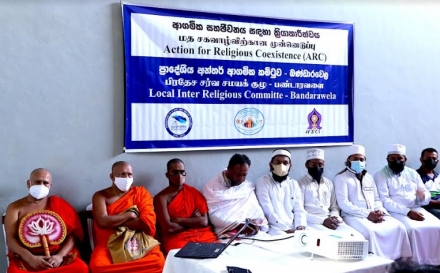 The content of the training programmes has been developed to help community leaders to understand, respect and appreciate diversity while enhancing their skills, knowledge and attitudes to foster cultural, behavioural and attitudinal diversity. Since LIRCs and youth wings consist of members belonging to different ethnic and religious communities, their understanding of pluralistic values will help them to be more effective in addressing localised conflicts.

During the training programmes, interactive tools and techniques were used based on participatory learning principles to encourage a productive dialogue in different thematic areas. While raising awareness of eliminating prejudice and stereotypes and the importance of creating a pluralistic society, the training content focussed on the concept of pluralism and understanding and how acceptance and diversity played a role in society.

Mohamed Thanseef is a committee member in Addalachchenai Youth Wing who is willing to make a change in society. He said the training had enhanced his knowledge of the pluralistic nature of society. He thought that divisions based on culture, ethnicity and religion have hindered the development of the country. Emphasising the importance of developing and promoting a common identity, he said that youth had a greater role in inspiring others to strengthen coexistence.

Ramamoorthi Saranya, another member of Addalachchenai Youth Wing, believed that the country&#39;s existing system had excluded minorities, the disabled and aboriginal communities. The political and social marginalisation of these communities had undermined the values of equity, he added. Delia Arulini of the Batticaloa Youth Wing said, “As a Sri Lankan I can accept others’ identities, religions, race and cultural values. The divisions created by our past should be forgotten. We should give up the conservative ideas that divide us and embrace others who have different identities.”

M.J. Ahamed Musharraf of the Batticaloa Youth Wing highlighted the importance of delivering this knowledge to youth. “As the next generation, we have a greater role in mitigating conflict situations. This initiative will enhance the awareness among youth while creating a common platform to be united and to share our different identities.”

At the Weligama training Ven. Natthewala Nantha Siri Thero, President of Shasanarakshaka Mandalaya, expressed his gratitude for the initiatives taken by NPC to identify and recognise the importance of the role of youth in strengthening religious freedom. “The impact of youth involvement was identified when we were implementing the previous project. It is admirable that this new intervention has taken initiatives to strengthen the role of youth. I am sure we will be able to see good results,” he said.

Representing the Negombo Youth Wing, Jude Anthony said, “We all are humans and no race or religion can separate us but existing racist ideologies create divisions among us. I urge everyone to learn all three languages since proper communication and mutual understanding are necessary to develop strong relations among different ethnic and religious groups.”