Opposing Discrimination and Hate in Business 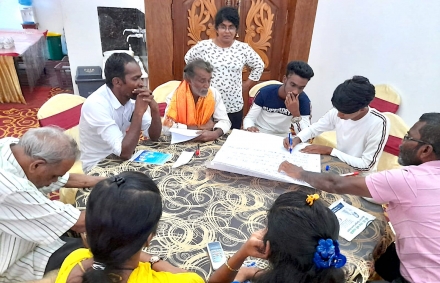 Under NPC’s Plural Action for Conflict Transformation (PACT) project, meetings to discuss economic discrimination, points of conflict and tension in relation to shared resources were conducted for District Inter Religious Committee (DIRCs) members in the Matara, Badulla, Anuradhapura, Nuwara Eliya, Galle, Ratnapura, Kandy and Batticaloa districts.
DIRC members were able to identify if someone running a business had faced discrimination when obtaining services and materials or when manufacturing or selling products and goods because of his or her caste, class, religion or ethnicity in each district in the forms of killing, threatening, warning not to buy or sell products and goods or damaging or destroying property based by extremism, politics, hate speech, false stories and myths. Participants discussed the negative impact of discrimination on individuals and the economy and how it affected ethnic and religious harmony and development of the country.

At each meeting NPC Project Manager, Saman Seneviratne, explained the severity of the economic crisis in the country and how it had been affected by conflict, corrupt politics and incompetent governance. He added that racism and religious discrimination had played a part in destroying the economy during the past two years.

Some participants said the discussion had opened their eyes as to how much ethnic and religious divisions and discrimination had hampered the economy and how important it was for DIRCs to support people to start a business as a means on earning incomes or to rebuild a collapsed business through the collective contribution of members from different communities.

Also under the PACT project, training programmes on human rights, fundamental rights, Right to Information and pluralism were held for government officials and women political leaders and community leaders in several districts.