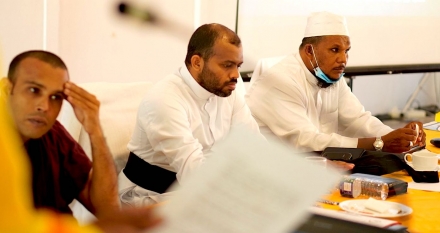 Participants discussed insights from the programme and the challenges they had identified in implementing project activities, sharing their experiences with people from other districts and learning from each other how to successfully manage situations in future encounters. The participants were representatives of district level partner organizations of the project.

The review meeting included a session where religious leaders representing Buddhism, Hinduism, Christianity and Islam shared the perspective of each religion’s teaching on violent extremism, as well as the views on radicalisation and inclusion. The participants asked questions from the religious leaders, which helped them to clear up their doubts about other religions.

The first video of 30 videos was posted on NPC’s Facebook page. The video campaign includes eight narratives from the project districts in Sinhala, Tamil and English. A target audience of one million is expected to be reached by the end of the campaign, which will promote inclusion and fact checking before sharing content to prevent violent extremism.