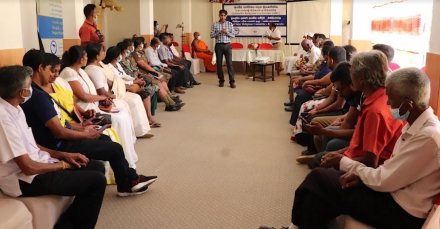 Two new Local Inter Religious Committees (LIRCs) were established in Mawanella in the Kegalle District and Bandarawela in the Badulla Districts under NPC’s Action for Religions Coexistence (ARC) project supported by the US State Department. They become part of a LIRC network in 12 locations set up and maintained through the now concluded Community Engagement for Religious Freedom (CERF) project. The new locations were selected after consultations with ground level organizations working in peace, reconciliation and human rights, a review of incidents of violence reported in media outlets and NPC’s other work.

Setting up LIRCs in these locations enables NPC to expand the inter religious network to areas where Malaiyaha Tamils live in tea plantations. Their inclusion into the dialogue on religious freedom was identified as an important aspect during the previous CERF engagement as they are often overlooked in the larger decision making process.

In Mawanella and Bandarawela, the ARC project team worked closely with local partners to identify relevant and suitable members for the new LIRCs. They will be capacitated on issues such as pluralism, gender, facilitation and mediation, community policing and rule of law. Youth wings were included into the ARC intervention to encourage youth activism. The youth, who are between 19 and 29 years old, will be mentored by LIRC members and encouraged to understand and apply knowledge gained to their work. It is envisaged that these youth wings will become community intermediaries and contribute to the discourse on pluralism and religious freedom. Members include youth parliament members and university students.