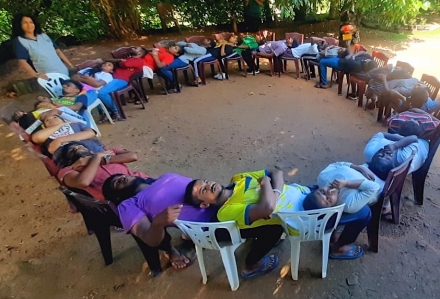 Two youth friendship camps called Youth Peace Park were conducted in Monaragala and Galle under NPC’s Plural Action for Conflict Transformation (PACT) project. They were part of a series of activities targeting youth including workshops on countering false narratives and hate speech and effective use of social media and friendship camps.

Today&#39;s youth are more interested in issues relating to good governance, democracy and financial corruption than ever before. Racism and religious extremism are rejected by them. They play a major role in building peace and reconciliation.

Events at the camps included sports and arts towards building reconciliation and discussions on democracy, good governance and inclusion as well as a cultural event featuring a variety of performances.

The youth who participated in the camps initiated a social media campaign to condemn hate speech and false statements. They also created different peace messages for building reconciliation. These were uploaded on their Facebook page along with the hashtag #YouthPeaceParkLK, which was created under the PACT project.

&quot;Four others and I came from Batticaloa. We cannot speak Sinhala. We thought the Sinhalese would not care about us but that did not happen. I met a Sinhalese friend. My Sinhala friend had to learn 10 Tamil words from me and I had to learn 10 Sinhala words from her. Language was not a big obstacle to our relationship. We are organizing a camp in Batticaloa with Sinhalese youth with the support of NPC,&quot; a participant said.