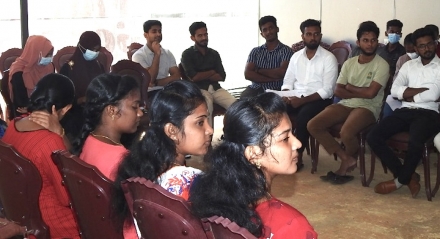 Youth wings have been formed in Mannar, Batticaloa, and Addalachenai to advocate for pluralism and religious freedom under NPC’s project intervention, Action for Religious Coexistence (ARC). The project team identified and selected the youth from targeted localities. As the youth wings and Local Inter Religious Committees (LIRCs) will be involved in the project, three orientation sessions were carried out to inform them of the three year action plan.

ARC commenced in August 2021 to expand the Collective Engagement for Religious Freedom (CERF) project that ended in February 2022. The new intervention will engage religious leaders, state officials, community policing units and youth to sustain the space for religious freedom within the framework of pluralism and rule of law.

The project will create and strengthen sub-national platforms in targeted areas and state structures that contribute to pluralism-based coexistence. Through the capacitation of religious leaders, community, state administration and community police units, these groups will collectively counter challenges in their communities and advocate for pluralism, equity and justice as the foundation for coexistence.

Project staff said they had received support from LIRCs during the CERF project to sustain the discourse of pluralism. LIRC members appreciated the contribution of state institutions, partner organizations, donor agency, religious institutions, religious leaders and journalists in carrying out various activities in different circumstances.

Religious extremism, violence and misunderstandings among ethnic and religious communities, hate speech and the influence of media have weakened coexistence; these problems were addressed by LIRCs through their different initiatives. The youth could be intermediaries in their communities while taking the lead in advocating for establishing an inclusive society.

During the orientation programme in Batticaloa, a member of the youth group, Amelia Nixi, pointed out the need to create a platform to share pluralistic values. “We have lots of friends belonging to other faiths and religions but we do not have a proper platform to collectively work towards a common goal. Creating such a platform will be a good initiative to strengthen our relations with other religious groups because we are all working together,” she said.

Sinnath Thambi Mohamed Thanseef is a committee member of the Addalachenai youth group. He believed youth had a greater responsibility in sustaining the discourse on religious coexistence, creating a value-based society.

In Mannar, Inbarasa Sarachandran said the orientation programme had enlightened him on his role as a youth leader for the next three years. &quot;We understood that we have a great task to carry out in our communities. We have to be very committed to reaching this goal. Mutual understanding and respect should be our fundamental values in working with the youth leaders from different ethnic and religious groups,” he said.