A Charter on Religious Freedom for a Pluralistic Society 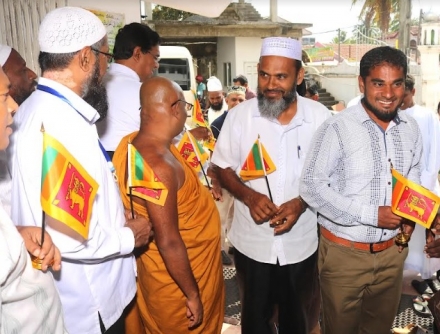 NPC’s Collective Engagement for Religious Freedom (CERF) project was initiated in 2017 to promote and strengthen religious freedom in the country within the framework of pluralism and rule of law. To achieve this objective, NPC established 12 inter religious platforms with the participation of the government officers, religious leaders, civil society members and community leaders representing 12 divisional secretariats. These committees share the values of religious freedom while acting as community leaders within their localities to establish religious coexistence.

During the final months of the project, a consultation process was carried out with Local Inter Religious Committees (LIRCs) while obtaining the assistance of members of District Inter Religious Committees (DIRCs) in 16 districts and prominent religious leaders to compile a charter on ensuring the religious freedom of citizens. The charter was developed based on the opinions and suggestions derived from the discussions that were held in 2021.

The charter explains the existing obstructions to ensuring religious rights while elaborating the duties and responsibilities of different parties to promote an inclusive society where there is a space for all religious beliefs. Through developing a discussion to safeguard religious rights, NPC will urge policymakers to develop laws to establish a pluralistic society.

The first set of consultation discussions was carried out with the participation of 417 LIRC members representing 12 divisional secretariats. Following the consultations, the first draft was developed consisting of LIRCs’ recommendations to strengthen religious freedom based on their experiences and opinions. The first draft was vetted by DIRCs in 16 districts.

The factors hampering religious freedom of citizens fell under three categories such as obstructions to sustaining inter religious coexistence, factions within the religious groups and hindrances by other parties.

Emphasising the need to address existing obstructions, the charter presents a number of recommendations to policymakers and to the society including religious leaders. Highlighting the duty and responsibility of religious leaders in ensuring religious coexistence, the charter provides a comprehensive explanation. According to the charter, religious leaders should enhance the understanding of followers on the clear and accurate teachings of the religions. They should inspire their followers to respect other religions. Compilations and translations of religious teachings should be monitored by a qualified expert pool. Preventing hate speech, obtaining youth participation in
religious work and taking efforts to undermine extremist ideologies are a few of the recommendations in the charter.

According to the charter, identifying the need of recognising Sri Lanka as a multi ethnic and multi religious country is needed to mitigate religious tension. The government has a responsibility to take action against misconceptions and extremist ideologies of religions. One of the key suggestions is reforming the divided school system based on religion. Following an equal policy in establishing places of worship and forming national and provincial level advisory committees with religious leaders from all faiths are also suggested.

The charter identifies the responsibility of civil society to eliminate religious discrimination. It emphasises the need to influence the government to establish a proper mechanism to strengthen religious cohesion among different communities and establish a society where all religions are equally respected.