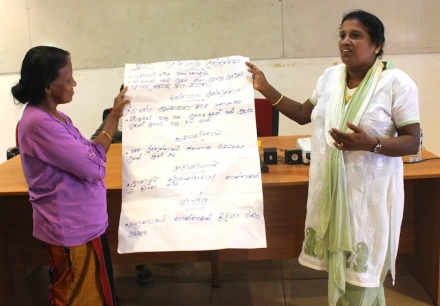 Fifty war affected women from five districts got together in Matara for two days to share experiences, exchange ideas and understand the process of healing under NPC’s project Post Conflict Healing: A Women's Manifesto, funded by FOKUS.

The participants from Vavuniya, Mannar, Puttalam, Hambantota and Galle- including women from NPC’s partner organisations-have been directly or indirectly affected by the war. A translator was on hand for those who could not understand each other’s language.

Each group discussed the problems confronting war affected women in their district. Military widows from Galle and Hambantota said they faced social sigma after their husbands’ deaths while women from Vavuniya and Mannar said they had been displaced due to the war. Some had no permanent housing while others could not repay loans, faced gender violence and had lost property.

In Mannar, women were still searching for missing relatives. Parents whose children were missing had received letters from the Presidential Commission investigation missing persons that were written in English, which they were unable to read.

Participants related several experiences and success stories of past activities to demonstrate how women at the grass roots level could get together to bring about change and find solutions to their problems.

The project focuses on women as being the agents of change in bringing about community level healing and encouraging women to take part in the decision making process.

It contributes to the reconciliation process through capacity building, encouraging increase of female participation at local and grass root level, community healing and providing a platform for the voice of the woman to be heard.