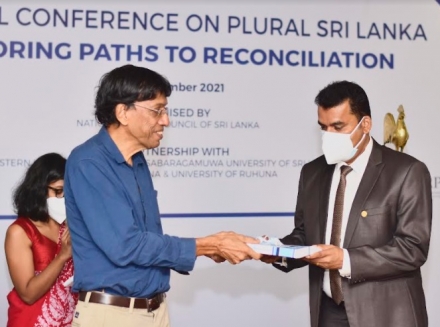 Ideally speaking governmental decision making needs to be pluralistic on both symbolic and substantive matters of importance to the minority communities. More often than not this has not been the case due to the structures of the state failing to discourage ethnic majoritarianism whether at the central level or provincial level. There is the need for a new understanding of democracy as being a consultative process with all of the citizenry and not just with the majority who have voted the government to power. It is this unresolved problem that has made the minorities question their status in the country which needs to be resolved early for the progress of the country.

Under its project Creative Youth Engagement for Pluralism NPC, with support from the Strengthening Reconciliation Processes programme of the EU and GIZ (Germany), brought together students from the Eastern, Jaffna, Ruhuna and Sabaragamuwa universities. More than 160 undergraduates from the four universities obtained awareness and organised their own debate competitions and artistic events on themes that centred around the concept of pluralism.

A conference was organized on the theme of Plural Sri Lanka: Different Paths to Reconciliation at which 30 research papers were presented, written mostly by undergraduate students and a few by faculty members on a variety of topics including peacebuilding and reconciliation, pluralism, conflict and conflict resolution. They provided testimony to the peace formation that takes place at the local level by civic actors who are engaged in pluralist and grounded actions even at a time when the macro political actors may not be prepared for the compromises necessary for reconciliation.

At the conference Foreign Minister Prof. G. L. Peiris, who was invited to deliver the closing address, answered questions from the floor on the concept of one country, one law. He stated that the purpose was not to eliminate personal laws but to ensure that rights were protected in a universal manner applicable to all citizens. The principle of one law prevailed as parliament was the supreme law making body. He also added that the government was committed to a process of reconciliation and did not consider NGOs to be enemies but as organizations that had a wealth of experience in working with people and possessing wide networks of influence. There is a need for this holistic thinking to be taken on by the government as a whole and not only by a section.

“Language is a huge bridge why one person does not know about the other. It is young people who are in universities and schools who should be guided to build peace in Sri Lanka. If we have to make a reality of pluralism, I would suggest that we work in different fields; that we need to work on educational, social and political connectivity,&quot; Prof. Peiris said.

Other speakers at the conference included Mr Thorsten Bargfrede, Chargé d&#39;Affaires of the European Union to Sri Lanka and the Maldives; Dr. Ahilan Kadirgamar, senior lecturer, Department of Sociology, University of Jaffna; and Prof. Premakumara De Silva, Representative of the Chairman, University Grant Commission as well as vice chancellors, academics and researchers of University of Jaffna, Eastern University, University of Ruhuna and University of Sabaragamuwa.

Mr. Bargfrede said that the EU was formed as a peacebuilding project after Europe had experienced centuries of warfare and resolved that it should end for all time after the Second World War. He said the EU was committed to working closely with civil society and the government to support greater understanding of each other within the country and by understanding to build a future together.

Nicolas Lamade, who heads the GIZ-Strengthening Reconciliation Processes (SRP) programme, complimented the students on the research they had done and said, “This is courageous work and a bold mindset to have. It is this kind of moral courage and open minded spirit of inquiry that a country seeks from its academic community.”